How can you estimate your carbon footprint ? 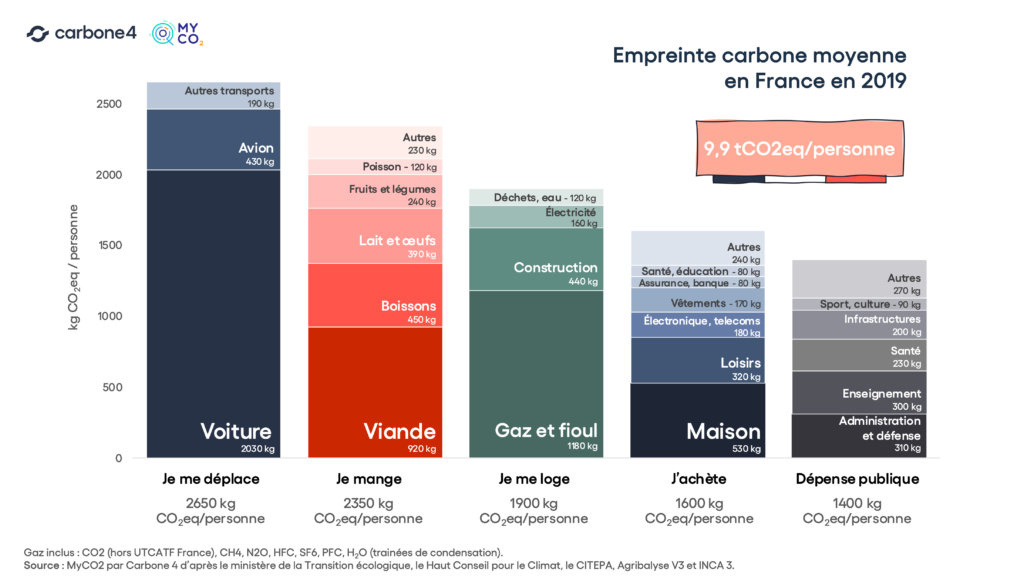 How can you estimate your carbon footprint, or climate footprint ? How can you know if your lifestyle is compatible with a sustainable world ?

If you are asking yourself this question, you made a considerable step forward and probably care a lot about the environment. Congratulations ! In order to make your life easier, I tried out several carbon footprint estimators and chose the ‘best’ one. The objective is to estimate your carbon footprint in only 5 minutes and to quickly get your priorities right in order to reduce it.

What is the carbon footprint ?

The carbon footprint is a broad estimation of greenhouse gas emissions associated with a country’s consumption (final domestic demand), regardless of where the consumed goods and services were produced in the world. This approach is to be distinguished from the national greenhouse gas (GHG) emissions inventory, which measures the overall GHG emissions of a territory (also called territorial approach).

The French government gives the following definition :“A country’s greenhouse gas emission inventory is to produce a diagnostic of the greenhouse gas emissions of public and private stakeholders, with a view to identifying and mobilizing avenues for reducing these emissions. These inventories are made using the protocols and recommendations defined by the IPCC.“

To illustrate: In France, we import more products than we export, therefore our carbon footprint is higher than the national inventory In 2017, with 633 Mt CO2eq (the CO2eq unit measures the environmental impact of one tonne of all GHG in comparison to the impact of one tonne of CO2), the carbon footprint was higher than national GHG emissions. See more below:

The target is to go from 10 to a maximum of 2 tons CO2eq/year/person !

If you’re only just discovering this number, you may be a bit shocked: we’re going to have to divide our emissions by an average of 5 ! In other words, divide the comfort you get through the consumption of energy by 5. Let’s quote the French national low carbon strategy, page 43:

In 2015, the carbon footprint of French people per capita was slightly higher than in 1995: 11 tons of Co2 eq /person. Trend wise, the carbon footprint of imports has risen by an average of 2% per year during the last 5 years, whereas the territorial emissions (directly emitted in metropolitan France)
have decreased by 2.5% per year. However, in order to respect +2° Celsius as the upper limit for global warming, global carbon footprints have to reach an average of 2 tons of CO2eq/person during the following decades.

These two graphs give us a good idea of the efforts we have to make. First of all, the average carbon footprint per capita has been relatively stable for the last 20 years, compared to the national inventory (obviously, seeing as we have displaced our polluting industries elsewhere. Clever, isn’t it?).

And here’s the average carbon footprint of French people, and the final target. Using data from 2017; this graph from the “Do your part” study by Carbone 4 (a consulting firm which assists the transformation of organizations in their decarbonization and adaptation to climate change) illustrates the magnitude of efforts we have to make.

NB: Depending on the sources, this number will vary from 9 to 12 tons CO2eq. It’s important to take into account what year the data has been generated, and particularly keep in mind that the order of magnitude is what counts here. Feel free to dig into it in order to get a better understanding of how these are calculated. Carbone 4 estimated that the average carbon footprint was 9.9 t CO2eq in January 2022, which is close to the number of 10 tons used in this article.

Why you should calculate your carbon footprint:

Knowing a country’s carbon footprint is one thing, knowing your own is another. Unsurprisingly; there are strong disparities according to your revenue: in France, households that earn the most also have the highest carbon footprint:

Therefore, in order to have a sustainable lifestyle, you should focus your efforts according to your own carbon footprint. Ten tons per year is only an average: a vegetarian Breton only moving around on a bike does not have the same footprint as a Parisian spending his weekends in Marrakech once a month. Obvously, it will be much less of a hassle for him to reduce his footprint.

After trying out several calculators, I settled on what seems to me to be the best one yet: “Our climate gestures” by Ademe.

You can check your carbon footprint by clicking on “Do the test” – and/or go to the end of this article to get the simulator directly embedded on this page.

Here is my result:

Note that the emissions related to the “public sector” are the same for everyone (1 285 kg CO2eq). The calculator takes into account CO2 emissions resulting from all public sectors (health, roads, education, justice, defense…). For a vegetarian going around on a Velib (a public bicycle rental scheme), I’m not doing too bad !

One carbon footprint simulator to rule them all ?

First and foremost, it’s public domain. It doesn’t belong to a private enterprise looking to make money out of it. Calculating your carbon footprint should be a public service aiming to help all citizens to lower their own footprint. Also, this simulator is perfectly transparent regarding the sources they use, and the algorithm itself is open source. You can consult them here, and contact the developers if you want to give your feedback.

This calculator is the proud successor of the formidable work of “AvenirClimatique” and their simulator, MICMAC. I also tried out the simulators from GoodPlanet, WWF, Reforestaction, Footprintcalculator, CoolClimate, Selectra. All of them are worth a try; but I prefer the one from DATAGIR.

Limits and potential areas of improvement of carbon footprint simulators.

When you use a carbon footprint simulator, keep in mind that it is only an educational tool, and has its limits. Until we have a better algorithm to estimate carbon footprints, this simulator makes several approximations, such as the use of monetary ratios.

For instance, in the textile industry, the same ratio is used for a Zara t-shirt made in Vietnam than a linen shirt made in France.
Another example regarding plane travel: Flying from Paris to New York with a correspondence in Amsterdam can be less expensive than a direct flight, but emits around 1.3 times more greenhouse gases. At this stage, it’s difficult to be more accurate than this, but we’ll get there !

Today, it is not possible to know your exact carbon footprint. For that, you would have to know where each consumed good comes from, how it has been manufactured (which material was used, which energy source, which in turn depends on a country’s energy mix…). You see how difficult it is.

Knowing your carbon footprint is especially useful to get orders of magnitudes.

Give it up for orders of magnitudes !

Now that you know the result, you can start working on your priorities, meaning which sector you should be focusing on (transportation, food, clothes…). Every gesture counts, because every ton counts. If you want to know how to rapidly and easily lower your carbon footprint; here are some good reads:

Now that you’re an expert in orders of magnitude, you understand that:

The goal of this article was to give you the possibility to estimate your own carbon footprint. Now that you have done so, you know what to do to lower it (less or no more flying, less or no more meat…). Don’t count on technology to save youand allow you to keep your lifestyle. If your carbon footprint is 10 tons CO2eq, you’re going to have to lower it, wether your want it or not. In one word: sufficiency.

In order to anticipate on comments I’m likely to get, here are some answers: “You’re preventing me from my freedom, you only talk about prohibiting stuff”. My answer is simple. It’s not forbidden to take the plane, it’s just simply impossible to divide your GHG emissions by 5 without drasticallyreducing plane travel. Seeing this as a prohibition means that you don’t yet realize what it means to have a carbon footprint of 2 tons of CO2eq.

Obviously, individual actions will not suffice. Voting with your money will not suffice. We need systemic change. We are so few with a sustainable lifestyle today, and we are going to need a collective effort, especially from the richer households. In Europe, there is no room for doubt.

And to all of those who say “Yeah, but my country only represents 1% of global emissions, far from the 27% of the Chinese”. This is whataboutism, a typical excuse to postpone climate action. I insist: read this article.

If you wanna dig into this topic some more: