Train vs. Plane: which one is the best for the climate? 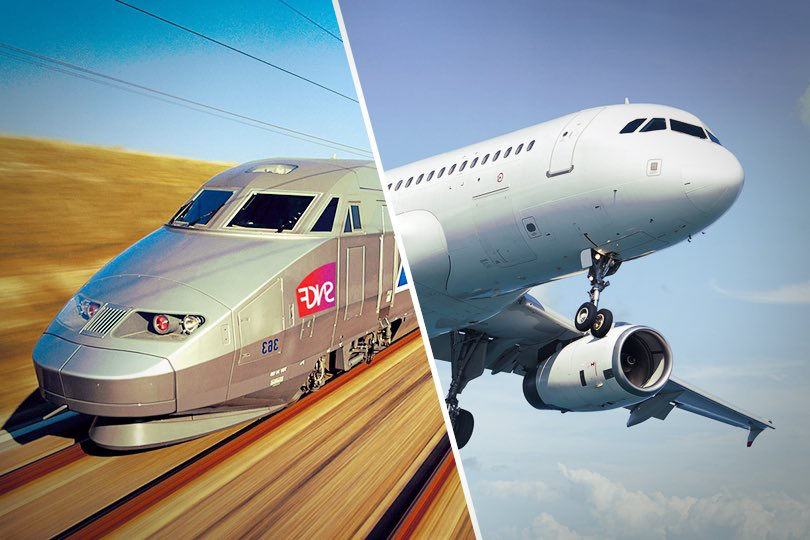 We often hear that flying is worse than taking the train for the climate… but which flight? Which train(s)? And the filling rate ??? What is the occupancy rate of a train to have the same CO2 emissions as the flight?

No need to panic. Laydgeur explains it to you in detail. Let’s go!

As a warm-up, we will start with the busiest airline in France: Toulouse-Paris, which saw over 3.2 million passengers in 2019.

For flight emissions, the DGAC calculator for the year 2020 gives the following values

We take the average of the two by rounding: 79 kg of CO2 equivalent per passenger.

The result of this calculation is simple: 79 / 1.4 = 56. This means that for this Toulouse-Paris trip, the passenger by flight emits 56 times more CO2 than the one by TGV.

Thus, to be equivalent to the emissions of the flight, the number of passengers of the TGV should be 56 times lower.

How many people is that?

Detailed figures by line are not available, so we will use national averages. The transport regulator tells us that the average carrying capacity of TGVs is 684 seats in 2018 (latest figures available at the time of writing), with an average occupancy rate of 67%, which makes about 458 effective passengers per train.

The flight is sent back in the ropes, very clear domination of the train, the referee whistles the end of the 1st round. But the TGV is not the only type of train to run on French rails…

For typical short-haul distances (a few hundred kilometers), the type of train that competes with it when there is no TGV are the Intercity lines (ex-Corail).

The link chosen here in this second example is Marseille-Toulouse. Here is what it gives for the flight, still with the DGAC emissions calculator: 62.1 kg of CO2 equivalent (distance 311 km).

On the rail side, on the Intercités train, the OuiSNCF booking site indicates 2.2 kg of CO2 equivalent per passenger for a journey made in 2021. So compared to the previous TGV trip, it is a little more emissions for a shorter distance.

What does it mean to have an Intercity train with 28 times less passengers?

We take the graph of the Transport Regulation Authority: the Intercity trains have an average capacity of 582 seats with a current occupancy rate of 40% (2018 figures), which makes an average of 233 passengers per train.

So to be as polluting as a flight, the Intercity train should carry about 8 passengers (233 / 28). Depending on the configuration of the train, it is between 1 and 2 people per car…

End of the 2nd round.

Round #3: What about the TER (Regional Express Transport)?

To finish the game, let’s assume that the two previous trips (Toulouse-Paris and Marseille-Toulouse) are made entirely by TER, which is the least clean type in terms of CO2 emissions.

This is a theoretical hypothesis, made only to push the reasoning of this article to the end, because TERs are regional lines (hence their name), serve many local and regional stations, and are therefore not in competition with flights, but with cars and buses.

The following are the emissions factors per passenger-kilometer for different trip types for 2020. The TER are largely above the others, because of the diesel locomotives on the non-electrified lines which lead the average (as well as the buses which are part of the TER offer).

On average, the TER emits 14 times more CO2 than the TGV, and 4.5 times more than the Intercités. But its occupancy rate is also lower (and yes, again the same graph): 26%, which makes an average of 84 effective passengers per train.

This gives in hypothesis TER :

So a hypothetical TER as polluting as the flight would have to carry ~21 passengers on the Toulouse-Paris, and ~14 on the Marseille-Toulouse.

That is to say the equivalent in capacity of this tiny railcar, occupying 1 seat out of 3 and leaving the folding seats empty.

End of the 3rd round. The flight does not get up. Train winner by KO.

Why is the train unbeatable?

You will have understood with these three examples, whatever the type of train and the lines taken, it is unbeatable in terms of CO2 emissions compared to the flight, or even compared to the car (the emissions of a Toulouse-Paris trip by TGV (i.e. 1.4 kg of CO2 equivalent for 793 km) correspond to a journey of only 10 km in a sedan-type car). Why ?

First and foremost, France’s electricity mix (nuclear + hydro) is one of the lowest carbon in the world, along with Norway, Switzerland and Sweden.

So any French electric vehicle will be extremely efficient on CO2 emissions.

While the flight burns thousands and thousands of liters of fossil kerosene per trip, which rejects a lot of CO2, and also a lot of other pollutants which also have an impact on the climate (but which are not counted in these calculations, the real impact of flying is between 2 and 3 times worse).

This is a very important point when comparing different means of transportation: how many passengers can they carry at a time?

A single level TGV train can easily carry more than 350 passengers, whereas for a short haul flight like the A320, if there are 200 people inside, it’s the end of the world (besides being packed like sardines).

A double duplex TGV train is 1000 seats, and 1250 in Ouigo configuration. Unthinkable for a flight, the A380 has between 400 and 540 seats, and at most it could theoretically go up to 850 seats in a single-class configuration, but the latter has never been commercialized.

A flight must accelerate like a tabanard its 70 tons with turbojets up to800-900 km/h and climb to 9000-10000m to be as efficient as possible (less friction at altitude). The energy expenditure is gigantic.

While a train runs, which is very efficient (and even more so if it is electrified because the electric motor has a very good efficiency), and even more so with the excellent rail-wheel connection (minimal deformation, very low friction). And then the layout of the lines is optimized: few differences in level, raised turns, … you just have to push.

In fact, the real tour de force of the companies that make these short-haul flights is not to be as polluting as 8-person TGVs, it is to continue to be able to do so with the active support of a former minister of ecology:

Here we are at the end of the article. There are now three possibilities.

Don’t panic if you are in the latter case, you can read the return match here !