The digital nomad: a nightmare for the climate? 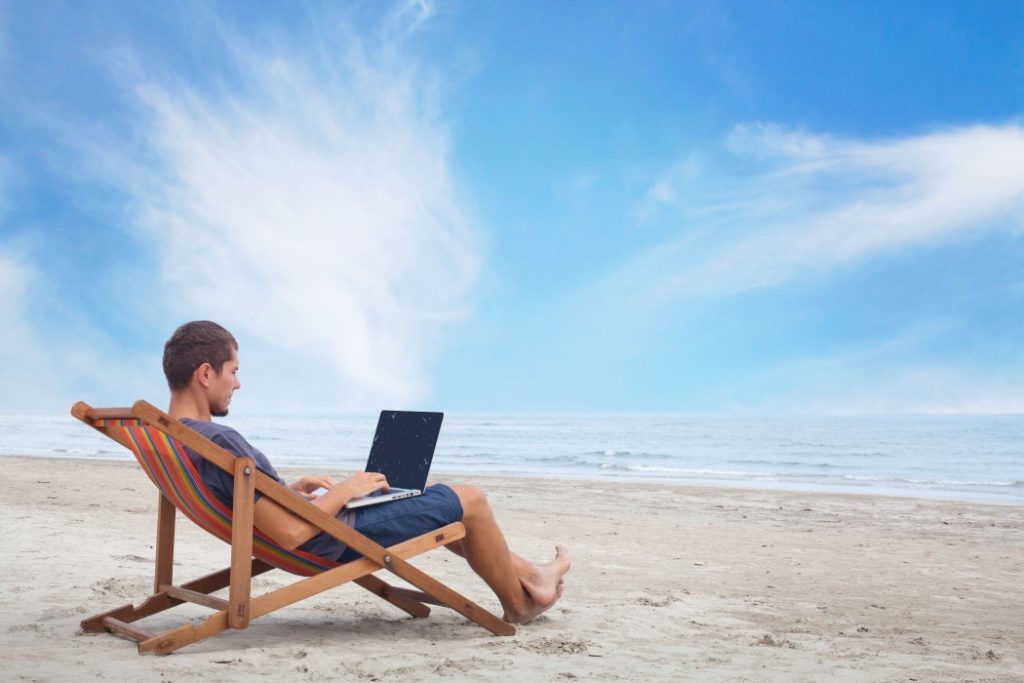 Is the digital nomad the new trend to champion global warming?

The question deserves to be asked. If you are not on social media, you may not be familiar with this lifestyle. This is nothing new: there were already #digitalnomad more than 10 years ago on Instagram, a hashtag that now counts more than 3.6 million posts.

Photos all more beautiful than the others, which forget one thing: the social reality of the visited countries, and the extravagant carbon footprint to get there.

What is a digital nomad?

A digital nomad is a person whose lifestyle consists of frequent travel, while working remotely. All you need is a computer and a good wifi connection. “Digital” is a simple translation of the French term “numérique”, but it is much more interesting to belong to a “DN” community than to Frenchify the name. For the “nomad”, this makes it possible to differentiate these people from expatriates, who generally stay much longer in another region or country.

When you surf on social networks, you quickly see that #digitalnomad often means going far away and multiplying countries. On Instagram, the vast majority of photos are accompanied by paradisiacal beaches, paradisiacal places…with the bonus of hashtags that announce the color:

Since the advent of Covid, there has been an acceleration of the phenomenon. We can see some start-ups making it a recruitment argument, or people for whom it becomes as important as their job title. Consequences: digital nomads have since invaded Linkedin, and they are making it known. You can spot them easily, they usually have 🌍 and 🔥🚀 next to their name. The best will have #Crypto and #NFTlover.

Their goal? Get back to nature, the real thing, by settling in the jungle in Bali (with fiber optics), or by going on safari in Africa to hunt unicorns. Some people take the plane as much as you could take the subway, with a carbon footprint 30 times higher than it should be, but it’s not that important… what are the climate emergency and the collapse of biodiversity next to a Linkedin post where you can post your picture in the sun?

If it only stopped with one or two people, it wouldn’t be worth writing about. Unfortunately, since the end of sanitary measures and the reopening of airports (carbon neutral, fortunately!!), the number of digital nomads has exploded. A real epidemic.

As for so many other sectors and activities, when you ask them on social media if their digital nomad activity is sustainable and what they think about climate change, you get :

Icing on the cake, some are ready to defend the indefensible. “Yes, but it’s okay, if he does once the Seychelles and once Bali, do not exaggerate either. This kind of comment reflects a lack of understanding of the orders of magnitude and the climate issues.

If you manage to do this kind of air travel and live adequately on the side without exceeding 2 tons CO2eq /year, please publish your results in a scientific journal. Science is waiting for you! In the meantime, read this article on the carbon footprint, then this article on flying. You will certainly never make that kind of comment again.

Finally, one of the new justifications for traveling to the other side of the Earth would be the need to go there and see for yourself that global warming is already taking its toll. Remember, Jeff Bezos explained to us that during his 5-minute tourist trip in space, he understood how fragile the Earth was. We find the same discourse for tourists in Antarctica.

What if digital nomads became the best ambassadors for the climate? What if these Westerners were the key to alerting countries that are already suffering from climate change, who unfortunately are not smart enough to understand it and need to have white saviors?

No need to feel guilty!

During a post on the subject on Linkedin, many comments said “don’t feel guilty”. The solution would therefore be benevolence. Education. It would be enough “to educate oneself on environmental issues to bring about a change in behavior.

Unfortunately, nothing could be further from the truth. It is said over and over again in the scientific literature that knowledge is not enough to change, but some people, certainly living in a completely utopian (and above all very depoliticized) world, always take the liberty of explaining to others how to ‘really do it‘. Know that in the real world, people don’t care about the consequences of their actions, even after spending time explaining why flying to the other side of the world 10 times a year was not sustainable.

You have to be patient and hope that the person in front of you is listening, which is unfortunately far from easy, especially on social networks. One prefers to display one’s Jaitoutcomprisme after having watched two lectures, it is all the same more practical.

Imagine that scientists and climate activists do not take any pleasure in warning about the climate situation and would most certainly prefer to do something else. All the more so if they are compared to moralizers.

The most improbable thing is that it is always the same profiles that take offense. Privileged people who don’t even realize it. Each questioning of their deadly way of life is akin to punitive ecology for some, a green dictatorship for others.

Responses to guilt-tripping are heterogeneous. This refutes the discourse of those who say that “we must not feel guilty”. This is wrong again. This may concern you, but your example, or the example of your Breton cousin, does not make it a statistical fact. The research on the subject is extremely interesting to read for anyone who thinks that psychology is an indispensable asset to move towards a sustainable society.

Moreover, why shouldn’t we finally make those people feel guilty who, by their way of life, make life unbearable for millions of others? What about using the right words? Insofar as climate inaction has and will have lethal consequences, why say “oh well, you’re exaggerating a bit” and not say “ecocide”?

Feeling guilty is mainly a luxury of the privileged. A luxury that is not available to populations already suffering from climate change. Yes, the 1% must change, and stop hiding behind a posture of victimhood. This would be disrespectful to the people who are already suffering and will suffer much more from climate change, even though they are least responsible for it.

Certainly, these people have the right to travel by plane as much as they want. This is the law. But this law is not adapted to climate issues. It is impossible to respect the Paris Agreement if we do not limit the emissions of the richest 1% (or even 10%).

Finally, and this must be understood by as many people as possible, climate change is not just a CO2 problem. It is a political and moral problem. It may be perfectly acceptable for some to continue their lifestyle knowing that people are forced to migrate or die as a result. These people need to understand that this is completely unacceptable to others.

Since I’m a digital nomad, I’ve been to Indonesia and Mexico!

Sometimes, some expressions are enough to translate the lifestyle of some digital nomads. “I went to Argentina. I did China yeah“. We no longer travel, we consume, and we proudly display it on social networks.

“It’s a great culture. They are so nice!” Jennifer and Hugo, staying in their 5 star hotel in Bali, talking about Indonesia.

As Rodolphe Christin reminds us in his book Manuel de l’anti tourisme, the tourist industry disfigures local cultures, their economy and their environment for the benefit of consumers in search of immediacy, formatted or falsely authentic products.

With the phenomenon of digital nomads in full swing, we observe the same syndrome, with the same consequences at the end. The locals end up suffering from the gentrification of the place, while seeing the Western cultural footprint gain ground, to the detriment of their own.

This lifestyle is definitely the lifestyle of the privileged who don’t even seem to realize it. An observation shared by Maxime Brousse and highlighted by Vincent Edin at Usbek & Rica:

Maxime Brousse relies on his own fairly extensive monograph, but also draws on extensive reading and observations of Instagram accounts devoted to nomadism. Few women in the lot and almost all white. HECs with a conscience invading Perche, Lisbon and other cool spots to set up collaborative canteens, coworking spaces and other incubators. Nothing new, but under the sun.

Are all digital Nomads the same?

Can we generalize digital Nomads? Good news: some people have an ecological conscience! #NotAllDigitalNomads

This is the case of Arthur Auboeuf, co-founder of Time for the Planet. His goal was threefold: to be able to play sports, enjoy nature, and limit his carbon footprint. That’s why he rents places only in France and near the TGV to avoid the car.

When I was sharing with other digital nomads, I noticed that it was an opportunity for them to realize that you can have everything you want in France. Unanimously, they all became fans and don’t want to go back. There’s no point in going to the other side of the world! We have a magnificent country, a diversity of landscapes. We are the first visited country in the world, it is not for nothing”.

This is also the case for Thomas Firh, co-founder of les others. For several years, they have decided to refocus their activity in France (today 90%, still without airplane), and to choose local people to make reports abroad.

Raphaëlle Colas des Francs had the same objective with Fertiles, a travelling school of cooperation and commitment to the social and ecological transition. Travel is “mainly by train through France to limit the carbon impact. We live on the spot with the inhabitants. We are very inspired by and involved in local projects“.

Thus, there is no lack of examples of lifestyles that limit environmental and social impacts. It is quite possible to “succeed”, to blossom, without having a lifestyle that will make the life of others unbearable.

In a world that respects planetary limits and our climate commitments, it is not possible to fly several times to the other side of the world every year. Not now, not even in the next ten years.

People who think otherwise are either unaware (which may change) or they don’t care, and then legislation will be needed. The current legal framework does not allow for compliance with the Paris Agreement, and a hypothetical green plane will not solve the problem.

Also, digital nomads need to wake up. We are no longer in 1980. There’s nothing “awesome” or “extraordinary” about wanting to promote yourself on social networks with an eco-friendly lifestyle. If you want to do something extraordinary, help thousands of climate activists slow down global warming. There are thousands of ways to act!

We all stand to gain. Unfortunately, at the moment, with this way of life, we are all losing.