You’re an ecologist but you have an iPhone 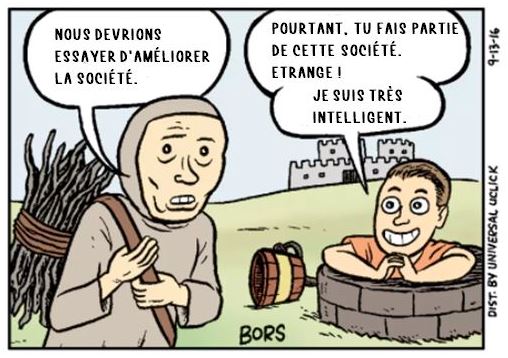 You’re an ecologist and you’re on social media! You’re ecologist but you have an iPhone! The hypocrisy of ecologists, as usual!”

Mention ecology and you will inevitably be confronted with this type of remark. Whether on the Internet or at a family dinner, after a few exchanges, it is not uncommon for the person you are talking to, after careful consideration, to attack you directly rather than rebound on your words. He will be as proud as a pigeon on a chessboard, thinking that not only is he right, but that he has got you right.

There is a well-known image that has been circulating for years on the Internet to caricature this behavior. It is convenient because you can replace iPhone with any word and it will still be valid:

Unfortunately, you won’t always be able to get away from the person you’re talking to and sometimes you’ll have to explain why what they just said is stupid. And so much for the Brandolini Law. I propose to answer them in three key arguments.

Taking five minutes to step back is enough to understand the place of technology in our lives today. It is absolutely everywhere. Whether at work, at play or in social interactions, we cannot escape it. In line with the title of this article, the right question should finally be ‘do you have a choice to have a smartphone?’ (replace smartphone with the word you want throughout this article, the conclusion will be the same).

You have that choice, but under certain conditions. Insofar as technology has gradually taken a predominant place in French society, making a cross on it is anything but trivial. Everything is done and facilitated for you to use technology and the Internet to “save time”, to make your life “simple”. Open a bank account. Pay your taxes. Find a job. We live in a capitalist, highly technological system, and doing anything other than following this imposed normality is an extremely difficult choice. Structurally difficult.

One example among many others. “Despite his 29 applications by registered mail, Patrick was struck off the Pôle Emploi”. He had the misfortune of not using the digital channels, a terrible “lack of seriousness“. This decision is obviously incomprehensible, especially when one learns that he can afford neither computer nor internet.

Living without a smartphone, that privileged thing?

Living without the Internet is extremely difficult. Living without a smartphone is just as difficult, considering that it is the easiest access to the Internet. This is not the result of a democratic choice, but of a choice structurally imposed by the State, itself immersed in a neoliberal economy for at least 40 years. This forced and generalized dematerialization not only makes difficult the daily life of people who live without Internet, but also makes difficult the daily life of people who wish to be free of it. A systemic problem, where we would like to point the finger at the individual…

The pervasiveness of technology and its use, both systemic and systematic, is extremely well documented in the scientific literature. This is a subject on which historians, anthropologists and sociologists have been working for decades, following the example of François Jarrige (historian) and Denis Colombi (sociologist).

The latter has also brought to light two interesting points that may be relevant to our discussion. First, some media and politicians tend to focus much more on how much the “poor” spend on a smartphone than on the rich and their outrageous spending. An easy parallel to make with the moral panic of your interlocutor, more shocked by the fact that you have an iPhone as an ecologist, than by a Cristiano Ronaldo or a Jeff Bezos who emits more CO2 in a space trip in 5 min than you and me in a whole year.

Secondly, and this is a point of reflection that you should systematically remind: “if you can live without a smartphone, it’s probably because things aren’t so bad for you“.the smartphone is indeed a tool of social link and freedom that is indispensable for the less well-off. The accusation of hypocrisy of your interlocutor is nothing but a sociological nonsense.

Live and enjoy, without criticizing?

It is also common to hear “just don’t buy and it will change“. It is far from being that simple. That would be forgetting the billions invested in advertising that pushes to overconsumption, and more precisely to the need to change the iPhone every time a new model is released, more performing, more practical, prettier and more ecological. The citizen must not only resist the injunctions to consume, but he must also be able to spot the greenwashing of companies, including Apple which announces itself carbon neutral for 2030. Why stop consuming, it’s carbon neutral! (This is obviously false)

Let’s play on equal terms if you want: remove your advertisements that lead to a world of +3°C global warming, and we can discuss again the use of the product that billions invested in advertising ask us to buy, everywhere, all the time, and in the four corners of the planet:

It’s as stupid as “France, you love it or you leave it“. One can very well be French, find many things wrong with our country and wish to improve it without wanting to leave it, right? In a country that still looks like a democracy, do we have the right to criticize Emmanuel Macron who wants to transform France into a giant start-up or are we obliged to say amen to his social and environmental policies?

Like science, technology is not neutral and is part of a certain type of society. This society is imposed on us and whether we want to do without it or not, we have no choice but to deal with it. Therefore, it is essential to have a critical look at everything we can enjoy if we want to change our political system and move towards a sustainable society.

2/ Redirection of responsibility to the individual

First, this is not surprising. Your interlocutor will always prefer to attack the messenger rather than the message:

Be prepared to be attacked personally. The ad hominem attack is a classic. “You say we should fly less, but you flew last year“. If this is the case, denying it is of no use. Instead, refocus the discussion on the facts. “You’re right, and I know it’s not great. But do you agree that a decrease in air traffic is necessary to respect our climate objectives, by asking an effort in particular to the most well-off households ?”

Second, this redirection of responsibility is a classic of climate inaction, explained in this article on the 12 discourses of climate delay. “It’s not Total that pollutes, it’s the citizen. “It is not the state that pollutes by investing billions in polluting industries, but the citizen who takes his car to work”.

And it is the citizen who takes his bike to cross Paris who is responsible for the stupidity of the European Commission, which authorizes an airline to make 18,000 empty flights to keep its slots?

Doing your part (for real)

Be careful, however, not to only blame the “system”. In recent years, we have seen a clash between individual and collective actions. This game of constant passing the buck while looking for excuses is counterproductive and only prolongs climate inaction. The two are inseparable and indispensable. We can’t say it enough: we will need both, and everyone.

The logic is always the same. Understand that everything you do has an impact, and have orders of magnitude in mind. Some things are more polluting and emit greenhouse gases than others. For example, whataboutism enthusiasts love to compare the purchase of an iPhone + its use to a round trip from Paris to Bali. It is however completely stupid. This is one of the reasons why everyone should know their annual carbon footprint in order to reduce their footprint on the living world as much as possible, without delay.

Knowing one’s impact and capacity for action highlights that ecological action must and can only be collective. It is thus necessary to create the collective conditions to change the system. Rethinking the commons, planning for the long term rather than responding to a short-term and individual logic.

3/ The end justifies the means

In order to change the system, several choices and compromises will have to be made. The first is to use “technology”, “his iPhone” and social media to achieve this change. To hope for a change of system without using social media is to deprive oneself of a formidable weapon to do so. Not only formidable, but indispensable.

To think that a change of this magnitude is possible without social media in 2022, is to have understood nothing about the power of algorithms and their influence on the last elections, all over the world (India, Brazil, USA, Italy, etc.).. To deprive oneself of social media to hope to change the system is to go to war with bare hands against tanks.

Another example, more recent and more personal. I challenged Jamy Gourmaud on Instagram and Twitter by pointing out that contests to win 2 plane tickets to Mauritius were an ecological aberration and went against our climate goals. A few thousand reactions later… the contest has been withdrawn:

A rare enough example to note (a first?), made possible by the activism of my iPhone. Should I have done nothing, not called out such an influential person and let this ecocide contest take place? The answer is no. Should we reproduce this approach by calling on influencers and politicians, thus avoiding thousands of tons of CO2 emissions? The answer is yes.

If someone criticizes an ecologist for having an iPhone, it is most certainly because he or she has no perspective on the omnipresence of technology in our lives and the difficulty of doing without it. No retreat also on the concentration of power, well helped by technology, which favors today the Business as Usual and thus the climate inaction. In the vast majority of cases, this person will be unaware of the ecological issues, and/or will be in an angry phase, thus preferring to attack the messenger rather than the message. Everything, finally, except questioning oneself.

As the system will not disappear overnight, two steps are necessary. The first is to understand how this system imposes technology on us and how difficult it is to escape. The second step is to think about how not to perpetuate this deadly system and change it. By all means.

For my part, I solemnly pledge to quit all social media and to stop using my iPhone the day there is no more global warming, no more racism and social injustice. I have only one word.