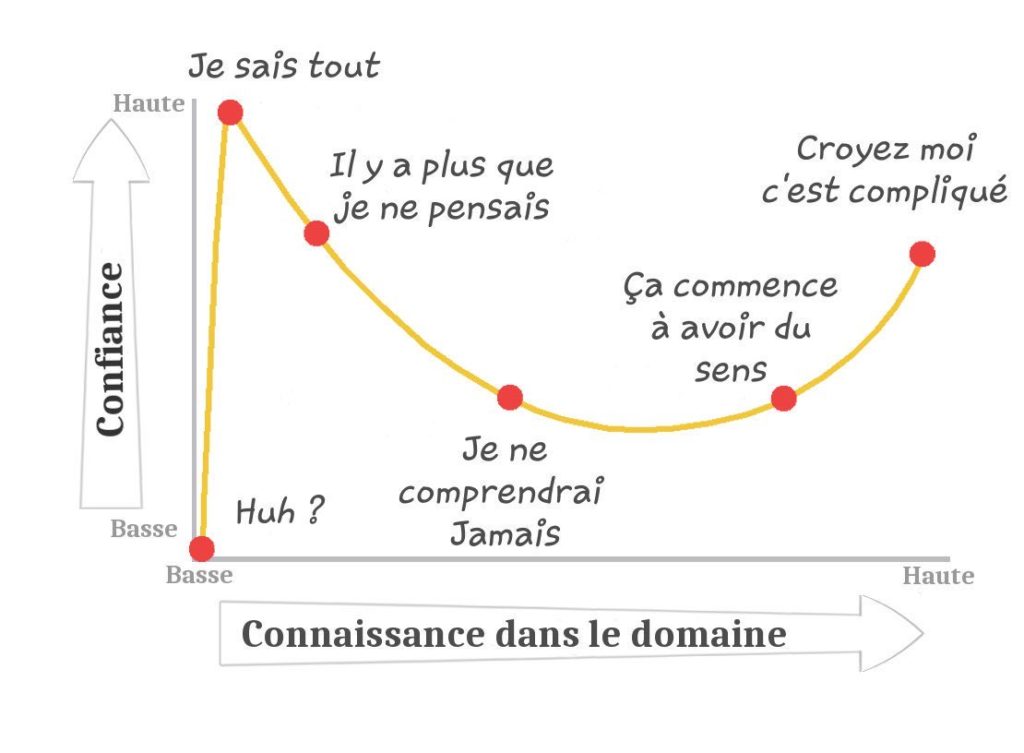 You don’t know what is the IKNOWITALLISM ? This is normal: this word did not exist before November 22, 2020! In a fit of Sunday night lyricism, I used that word to describe a phenomenon that literally exploded in 2020.

Indeed, we are lucky to have more than 60 million doctors, epidemiologists and financial experts in France, all of them giving their opinion without restraint on social media. So, before going on the networks, some pre-requisites could save you some irritation… and waste of time. Do you know, for example, what Brandolini’s law is? Poe’s law? Would you recognize a candidate for the IKNOWITALLISM ? Do you make the difference with ultracrepidarianism? I knew we would end the year with a bang.

More and more people are learning about climate change: this is great news! However, the level of knowledge felt is sometimes very far from the real level.

To illustrate this feeling, let’s take Jean-Marc Jancovici’s courses: 20 hours of courses, a big slap in the face from the first video… and eureka! We think we have understood everything about the climate. But this is not true! Thinking you’re at the end of the road when you haven’t even left the parking lot is the perfect illustration of IKNOWITALLISM. As always, it’s more complicated than that. These courses should be just the beginning of your thinking. To be interested in the environment and climate is to be interested in absolutely every subject: natural sciences, energy, politics, philosophy, psychology, sociology, economics, climate justice, history of technology…

Thus, IKNOWITALLISM is defined as anyone who thinks he or she has understood the ins and outs of a complex subject after having read only an article or a video.

Be careful not to confuse it with the Dunning Kruger effect, an effect that is constantly cited without ever having really read what it is. Indeed, it is often represented by a U-shaped knowledge/confidence curve, whereas the initial study curves look like this:

Finally, some areas require continuous monitoring. Without an update, an expert in economics 10 years ago would have missed much of the work on the commons, the golden age of degrowth… and missed the comical Nordhaus getting his ‘Nobel Prize’!

The best subject to illustrate the IKNOWITALLISM is undoubtedly agriculture. Even after dozens of hours of reading, there’s no way I’m going to write about it until I’ve spent some time physically with farmers and understand the pros and cons of their choices. Add to that the fact that there is a different agriculture depending on the type of soil, the climate, the desired economic model, that nothing is fixed and likely to change every year… Again, this topic is most certainly the one that deserves the most humility when it comes to it! This is how every good Parisian wanker who has been eating for years without ever asking himself how the contents of his plate are made should do…

IKNOWITALLISM is indeed in the same family as ultracrepidarianism, but there are some nuances.

Here is the definition of ultracrepidarianism : behavior that consists in giving one’s opinion on subjects about which one has no credible or proven competence. Even if the term has been popularized in France thanks to Etienne Klein, it is actually more than a century old! We can also imagine that some people have shown excessive ego long before the 19th century without the term being attributed to them…

To illustrate this, who better than Professor Raoult? While he seems to have some knowledge of epidemics, the same cannot be said about the climate, a subject on which he has been talking nonsense for years! For a man who speaks in the name of science, this is not very good Didier. Ultra-repidarianism thus constitutes in some cases an argument of authority. The Nobel syndrom is then a case of ultracrepidarianism, of which Didier Raoult is a victim… without the Nobel.

As for the IKNOWITALLISM, the difference consists in the fact of having made a certain effort to appropriate a subject. In the other case, you give your opinion on everything, when you simply know nothing about it (otherwise known as the Christophe Barbier jurisprudence). I will most certainly disappoint some people, but I have some bad news: it is IMPOSSIBLE to master all areas. You’ll have to grieve. Don’t be like some editorialists who are experts in everything (especially in nothing) and who assert things with unfailing aplomb without ever using the conditional.

Limits of the concept

Like any highly scientific and peer-reviewed concept, IKNOWITALLISM has its limits.

First, the absence of expertise should not be synonymous with a refusal to take part in the debate on ideas. We do not live in an epistocratic system, in which power and business are directed by the opinions of experts in each relevant field. This famous ‘it’s too complicated for you, trust us we will take care of it’ has not always been a success until today…

Second, you may be struck with impostor syndrome. Between “it’s starting to make sense” and “trust me it’s complicated”, you might be aware of how much you don’t know and thus hold back from expressing yourself on a topic. We should not be in this state. Being in an interrogative form and expressing oneself in the conditional appears healthier than never expressing oneself.

Finally, if something is too complicated to give your opinion on, that is also sometimes a bad sign. Do you have to be a fusion expert to give your opinion on energy production? In what quantity? How to use it? This phenomenon is of course transposable to other domains, like certain exotic products in finance, or other political decisions that are incomprehensible to a majority of citizens (and therefore undemocratic).

We are going to have a fast-paced society for the next 30 years and we won’t have time to be bored! Nothing will happen as planned, that’s about the only certainty we can have.