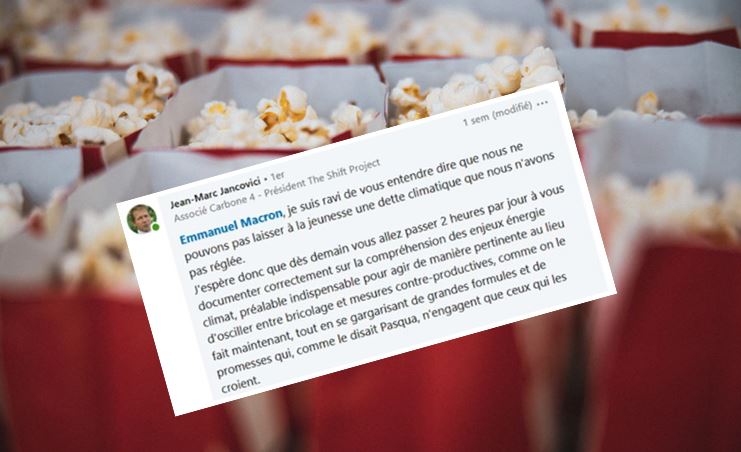 “AHAH he’s so stupid he didn’t understand anything”

“But she doesn’t know anything, I tell you… she’s a marble, she’s not even a trained engineer!”

Here are the comments that one can read since years on the networks as soon as a new article comes out on a politician. More recently, we had a textbook case with an intervention of Jean-Marc Jancovici on Linkedin, rebounding on a comment of E. Macron, who said “to be aware of the sacrifices asked to the youth these last months“. Response from JM. Jancovici :

For those who do not know JM. Jancovici, his 2019 courses on energy and climate are the best 20 hours you can spend if you want to go deeper into the subject. Without taking too much risk, I would say that he is in the top 3 of the people who have worked the most in France in the fight against climate change (while waiting for Nabilla‘s ecological awakening). His outspokenness and experience are major assets, which allows him today to have more than 250,000 people following him on Linkedin.

On a social media like Linkedin, where greenwashing and bullshit have no limits, it’s good to see someone who goes beyond the tongue-in-cheek. I’m like everyone else, when I see a comment where he’s teasing a company or a person caught in the act of greenwashing, I grab the popcorn. So that’s not my concern.

What worries me are the reactions that follow, and this on all social media. First of all, it was the record of reactions on the FB page. This is not really a surprise, but it is symptomatic of an era, of a year: the invective, the clash, pays more than the background work. Many articles are published every day, but fascinating studies on biodiversity or oil, major issues of the 21st century, go by the wayside. So be it.

However, the most worrying thing is the comments, and it is especially on this that I am speechless. Here are some of them, chosen on the spot:

What is going on in the minds of these people to criticize E. Macron, and above all, how do they know the state of knowledge about the President’s climate? Who really knows the extent of it? I know it feels good to get it all out, especially in 2020 when we spend half the year cooped up at home. But this mania to give his opinion on everything without having the slightest idea, it is simply unbearable. We have enough concrete examples of bullshit every day not to draw conclusions about things we have no idea about. I am of course ignoring the comments that think that JM. Jancovici does not know what he is saying or doing when he comments on Linkedin under the profile of E. Macron…

I also noticed the same thing with an excited person this Tuesday during the publication of the interview of Olivier Fontan, where I said as a question “No surprise, Mrs Pompili knows very well the subjects.” This person then answered ‘‘isn’t there a typo ?“Thinking she was smarter than everyone else. To know a little more, you had to click on the link, where Mrs Pompili is in committee with several members of the High Council for Climate. Given the questions she asks and the way she bounces back, one can judge that she certainly knows more about climate issues than a horny person commenting on a facebook post from her toilet on a tuesday afternoon. Translated with www.DeepL.com/Translator (free version)

There are a multitude of examples in the same genre, such as the knowledge of Edouard Philippe. How many people have I heard say that he has no idea about climate issues. We are talking about Edouard Philippe, already in hearing at the National Assembly in 2013, on climate change with JM. Jancovici (already handing out slaps)? The same Edouard Philippe who speaks of collapse alongside Nicolas Hulot? Last example: Elisabeth Borne. How can we think for a moment that she doesn’t know what a LCA is, as I have read at least 10 times about Fessenheim? That she ignores the impact of the aviation sector on the climate when she insists on the expansion of the T4 in Roissy? Did you even look at his schooling and then his background?

What we should expect from politicians is that they have a vision. Let him/her see in the long run. Unfortunately, even if the climate emergency has already been causing disasters for several years, it is still too little to be politically interesting. What he/she sees in the short term are the polls, the next elections… And the climate, for the moment, gets less votes than slamming Islam or promising nice pensions.

Politics is only about political strategy. This is why I insist daily on this famous tipping point, which I hope will come as soon as possible.

I have already explained the concept of silo thinking at length. This principle is the opposite of systems thinking, which all too often leads to giving one’s opinion without having first taken the necessary distance. I can’t understand those people who give an opinion on a situation without knowing the ins and outs, or on a person without knowing him.

The policy has been the same for 2000 years. That the same tricks are used. Schopenhauer’s Art of Being Always Right must be read. This book (very short, 74 pages) is enough to understand 90% of the bullshit of the rhetorical art that you hear on TV, and that on all subjects (the climate, the Covid…). I keep saying it, and it should come as no surprise to anyone: there is a world of difference between what those in power (or those who want it) think and do.

Before we conclude, let’s take a quick look back at one of the highlights of 2020. Now that we have a little distance to talk about it, no one should doubt the government’s competence on the closure of Fessenheim. The real problem is the political courage that is cruelly lacking. There was NO reason to close Fessenheim, the ASN itself says so. Emmanuel Macron has just chosen to continue a decision taken long before him which he could have largely reversed. But…electorally speaking…not interesting. Would it have been the same if all French people were properly informed about the issues? To learn more, I recommend this video from Le Réveilleur, which popularizes this subject brilliantly.

To use the word of the year 2020, ultracrepidarianism continues to take its toll every day. I don’t know what goes on in the minds of people who think that E. Borne is a total idiot, that Edouard Philippe does not know how to make a rule of 3, that B. Pompili is stupid because she is not an engineer… This is forgetting the 2 variables that have been missing for years in politics: courage and ethics.

Of course, don’t make me say what I didn’t say: there are many elected officials who are absolutely useless on climate issues! But to think that this is the case for the president or the minister is clearly wrong.

As you can see, I am one of those people who think that our politicians are more calculating than stupid. However, we will have to change our priorities, and quickly. Change software. Stop thinking in the short term, before the long term (the climate) irreversibly upsets the short term.

I know what some people think: Bon Pote is naive, he is simply fooled by the first universal law of Stupidity: “Everyone always and inevitably underestimates the number of stupid people in circulation“. What if you were right ?