Should we ban private jets? 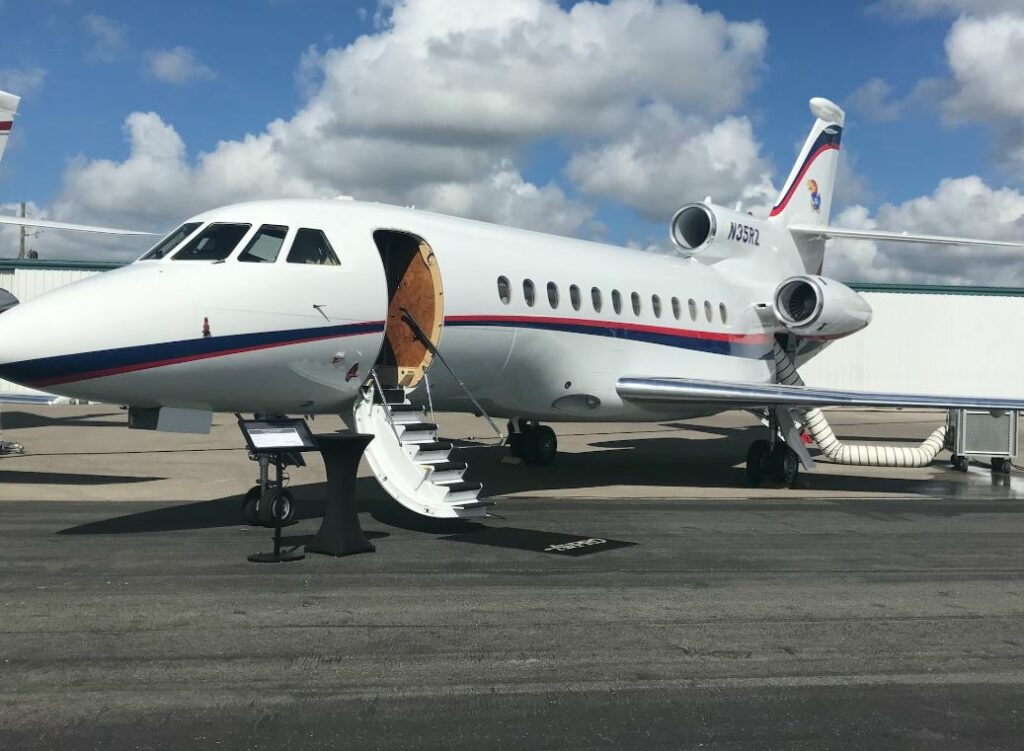 For a week now, politicians and media have been talking about private jets. At the origin of this media interest, Julien Bayou, EELV deputy, who expressed the wish to “ban private jets”. According to him, “This is the measure that penalises the fewest people for the greatest and most immediate impact on the climate. It is a question of justice“.

The reactions were not long in coming. For some, it is “an attack on freedoms“, a “green ayatollah“, a “green Khmer“. For others, it is a perfectly logical measure in the midst of a climate emergency. Given the price of a private jet flight and the average wealth of the people who use them (1.3 billion euros), these media reactions are not so surprising.

How much do private jets pollute?

In order to have an informed debate, it is first necessary to know the impact of air travel, and more specifically of private jets. A comprehensive report was published by Transport & Environment in 2021 and there are several key points:

We understand from the figures that a one-way trip from Paris to Nice in a private jet is about 2 tonnes of CO2, which is the target annual carbon budget of a French person for 2050. This means that the maximum amount that should be emitted in a year is emitted in one hour. It should also be remembered that 1% of air travellers are responsible for 50% of the aviation sector’s emissions, and yes, private jets are part of that.

No matter what side of the political spectrum you are on, you soon realise that flying in a private jet is one of the worst things you can do for the environment and that it is absolutely not compatible with the Paris Agreement and our climate commitments. Moreover, no one (I mean no one) has been able to justify the use of private jets from a rational point of view: editorialists, politicians, haters on social media, etc.

If the debate is not rational, it is ideological, and benefits a certain category of people.

Private jets, the new great national cause to defend

On leaving his post as Minister of Transport, Jean-Baptiste Djebbari declared last May that “we have begun – for good – the transition to the low-carbon aircraft“. This is a lie, since the High Council for the Climate says in its 2022 annual report that “the decarbonisation strategy for aviation is not underway, despite the technological and industrial demonstrators, and does not include demand management“.

A sentence that could not be clearer, thus refuting the fallacious arguments of the aviation lobby and the Macron 1 government. Is there a change for Macron 2? This is what we could hope for, in particular via Clément Beaune, the new Minister Delegate in charge of Transport: “We must change behaviour and set rules for these private flights at European level, it is useful and necessary“. According to the Canard Enchaîné, he was quickly called to order by President E. Macron: “the sufficiency plan must not be the Lépine competition of all the demagogic ideas of ministers who want to make a name for themselves“.

Private jets and the return of green job blackmail

The worst defence probably came from Olivier Véran, the government spokesman, who said “in the majority of cases, this is commercial transport, it creates jobs“. Employment is always the ultimate argument of politicians and business leaders to justify anything and everything. This was the case with the Ubers Files, and it is the case again with private jets.

But what does it really mean? That nothing can be changed because jobs are at stake? Should TotalEnergies continue its oil and gas operations ad vitam aeternam because there are jobs at stake? Why is employment not an issue when companies relocate for tax reasons or make any kind of cut in the wage bill to please a few shareholders, when the company is highly profitable?

Why is employment not an issue when companies relocate for tax reasons or make any kind of cut in the wage bill to please a few shareholders, when the company is highly profitable? This is not true. On the contrary, this is why these people are asking for anticipation and planning, to avoid social breakdown. This job blackmail by irresponsible managers must stop as soon as possible.

In the end, it doesn’t matter how many heat waves there are. Never mind the drought. It does not matter that France is on fire. The Macron government, like all previous ones, will always put profit before the survival and well-being of millions of people.

Without social justice, no ecological transition

Since the beginning of the summer, “ecologists” have been called “green Khmer“, “green ayatollah“, etc. The system that is steering us towards a +3°C world is defending itself as best it can. Insults will not save you from more heatwaves, but a change of system.

This change of system will be impossible without social justice. On ne peut pas demander à tout le monde de faire du vélo si les exilés fiscaux sont sur leurs yachts. You can’t ask the French to take the train instead of the plane when the Prime Minister flies back and forth in a private jet to vote, or when tickets are sometimes up to 5 times more expensive. Although the IPCC pointed out last February that it is unavoidable, it is still not part of the government’s strategy for energy transition.

Finally, a very important point is rarely mentioned. We cannot reduce the emissions of the richest to their emissions alone, the so-called “1%“. They don’t just emit C02, they pull a whole system of growth and death to do the same thing through their lifestyle. It’s the same with influencers, when they fly back and forth to Dubai in a private jet and put it on their Instagram story. This is recalled in this study by Nielsen et al, 2021 :

People of high socio-economic status have a disproportionate influence on climate because of their role as consumers, investors, role models in their social networks and for others who observe their choices, participants in organisations and citizens seeking to influence public policy or corporate behaviour.

Watchdogs and lobbies to the rescue of private jets

Given that the entry fee for private jet travel is at least €5,000 and that even a very wealthy person cannot afford to use one frequently, we might have expected an objective media treatment of the issue. This was without taking into account that the average fortune of private jet users is 1.3 billion euros and that being so rich allows one to have influence, including in the news.

Liberal, conservative, mainly right-wing and far-right politicians and editorialists have alternately defended private jets, without ever providing evidence that their use is compatible with a sustainable world. Seeing climate sceptic editorialists like Julie Graziani explain live on BFM to Yamina Saheb, lead author of the latest IPCC report, how the IPCC works… ineptitude after ineptitude.

Whether it is reducing or banning private jets, for these people it is akin to a dictatorship. The repeated insults continued throughout the week, even reaching a Godwin point. Mac Lesggy, the “pro-science” TV host, used a phrase from the German pastor Martin Niemöller, uttered during the Nazi regime, to defend private jets and swimming pools:

Christian Gollier, Director General of the Toulouse School of Economics, even proposed: “rather than banning private jets, let’s tax their CO2 emissions at €500/tCO2, more than 10x the carbon tax we have in our petrol at the pump, and 3x the climate damage caused“. It is easy to imagine a billionaire no longer taking his private jet because it will cost a few thousand euros more…

The most classic climate inaction discourse is called whataboutism, and consists of saying “we only represent 1% of emissions, look at “x sector” it is 4%! This is true when some politicians repeat over and over again that France accounts for only 1% of emissions, but it is also true when the airline lobby repeats over and over again that their sector accounts for only 2% of global emissions.

While this argument has been debunked many times, the communication chosen is again the same. Here by GIFAS (Groupement des Industries Françaises Aéronautiques et Spatiales), then repeated over and over by the actors of Business as Usual. Type “0.04% of emissions” on the networks, it is very instructive.

Anyone who starts his or her sentence with “we should reduce emissions from this sector first because it accounts for X% of emissions” has not understood the climate challenges. We have an ecological emergency: all sectors must reduce their emissions, at the same time, and without exception.

This applies to private jets, SUVs, the digital sector, consumption of animal products, etc. This does not, of course, prevent efforts from being prioritised. But the ostrich policy, if it was still valid in 1990, is no longer valid in 2022. Pointing the finger at others or at another sector serves no purpose, and ultimately leads only to climate inaction.

Perhaps we should remind all these people, if being rational still serves a purpose, that CO2 emissions from human activities continue to rise in 2022 and are up +2.9% over the January-July period compared to 2019, the last year before Covid.

The extremely virulent reactions to the proposal to ban private jets reflect a certain paradox. What a strange situation that people who will probably never be able to afford to own a private jet or even to travel on it are prepared to call anyone who proposes its abolition a dictator.

The argument most often put forward is that of “freedom”. Yes, there is climate change, “it’s getting warmer, but I think we should avoid punitive ecology“. A world where it is sometimes so hot in your city that you can’t do anything, it’s obviously not punitive. In 2022, France suffered 3 heatwaves in 3 months, mega-fires, a historic drought, it is happiness, it is freedom, it is not punitive.

Today’s success, the dream of becoming a billionaire and hesitating between two private jets, like Kylie Jenner (you wanna take mine or yours?), is exactly what is leading us to a world that is +3°C warmer and therefore condemning part of humanity. We are at a turning point, and choices will have to be made. For this choice to be fair, it must be democratic. And for it to be democratic, everyone must be aware of the social and environmental consequences of the current system.

Either we assume and support this world, we assume global warming, or we stop the hypocrisy and give ourselves the means to limit it. It’s not much more complicated than that.

Since flying in private jets is exploding the carbon footprint, it makes sense to reduce or even ban their use. Without social justice, there can be no ecological transition. This is recalled by the IPCC, the High Council for the Climate, etc.

If exceptions have to be made, e.g. for organ transports or medical evacuation, this has to be taken into account and discussed intelligently with all actors involved. But we need to get serious about the structural changes needed if we are to meet our climate commitments.

The end of “affluence” announced by Macron must indeed concern above all the most affluent households, including the French who take private jets as we might take the metro. The millions of French people living in an energy sieve or having to rely on food aid have never had the luxury of abundance.