Permafrost: has Earth passed the point of no return? 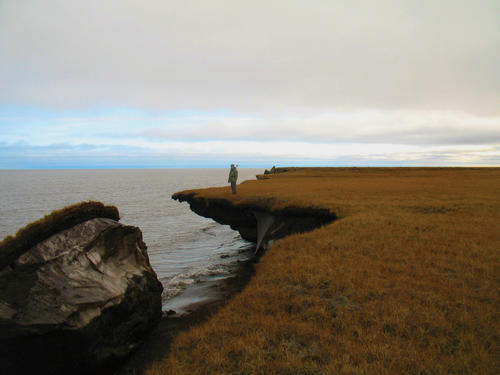 Ongoing climate change, which is very pronounced in the Arctic regions, is driving permafrost to thaw. What is the problem? As temperatures rise, those soils frozen for thousands of years release significant amounts of greenhouse gases, further amplifying global warming. Is there a risk of the climate machine going wild?

Though climate doomits like to talk about this subject, what do scientists think?

We take stock of the matter with Florent Dominé, geophysicist and CNRS researcher at the Franco-Canadian Takuvik laboratory in Quebec.

Permafrost is a perpetually frozen ground, the invisible component of the cryosphere. In these Arctic regions, when temperatures drop, the ground freezes deep down and the forming ice makes it impermeable. The surface layer of the soil thaws each summer and refreezes each winter: this is the active layer.

It is more or less thin (between 15 and 250 cm thick). Permafrost itself can be several kilometers deep!

Much of permafrost was formed on land released by the melting ice caps 8-12,000 years ago. The ground no longer protected from the cold by these caps froze. In certain parts of Siberia and Alaska, there were no ice caps: the permafrost can be millions of years old.

Large areas of permafrost persisted during warmer interglacial periods, including the Holocene – the current geological era, which began about 12,000 years ago.

The 2019 IPCC Special Report on the Ocean and Cryosphere in a Changing Climate (SROCC) says « Over the last decades, global warming has led to widespread shrinking of the cryosphere, (…) and increased permafrost temperature (very high confidence). Permafrost temperatures have increased to record high levels (1980s–present) (very high confidence) including the recent increase by 0.29ºC ± 0.12ºC from 2007 to 2016 averaged across polar and high mountain regions globally ».

As a reminder, IPCC experts defined four pathways of greenhouse gas (GHG) emissions and atmospheric concentrations for the 21st-century and beyond. They are referred to as RCP: for Representative Concentration Pathways. Based on these RCPs, climate scientists describe weather conditions and climate change impacts associated with each pathway.

Where is permafrost found?

Permafrost covers about 15 millions of square kilometers in the northern hemisphere, i.e. 20 to 25 % of land surface. Today, 3 to 4 million people are estimated to live on permafrost. And these regions are warming up faster than the rest of the world.

Why is permafrost thaw a serious threat?

Yes, on this frozen soil for hundred of thousands, or even million years, plant residues are acculumating. At our latitudes, these residues would be degraded by bacteria … but because of the frost, their metabolism is very slow. However, as permafrost thaws, it induces a shift in microbial metabolism processes resulting in an accelerated conversion of organic material into CO2 or methane – the two main greenhouse gases (GHG) – (we will explain later why sometimes CO2 and sometimes methane).

Unless you’ve been isolated in a cave for the last few decades, you are certainly aware that there is already too much GHG in the atmosphere! And that the increasing atmospheric concentration is a direct driver of ongoing climate change (otherwise, it’s explained very well here). In short, we are facing a positive feedback (For the record, the word ‘positive’ doesn’t mean it’s a good thing for the climate – it’s actually the opposite!)

What are the impacts of permafrost thaw?

According to recent estimations, 1 400Gt of carbon is stored in permafrost soils. 1 ppm atmospheric CO2 corresponds to 2 Gt carbon. Knowing that not everything stays in the atmosphere (half of carbon emissions is absorbed by oceans and lands), we can fear an increase of up to 100 ppm (which corresponds to a release of about 400 Gt of carbon) by 2100 under the worst-case scenario.

For the record, the current CO2 level in the atmosphere is 410 ppm. As for methane, it is much more harmful than CO2 (about 30 times more), but luckily levels averaged only 1.9 ppm.

Will we be able to adapt? As always with ongoing climate change, the problem is not so much about the increase of atmopsheric CO2 but the rate at which the concentration increases. In the past, climate change – whenever it was – it was much slower so most ecosystems had time to adapt. But current climate change is too fast for the ecosystems,… as well as for humankind.

Permafrost thaw has many other consequences!

The climate doomists adore this tipping point concept, and permafrost thaw is among their favorite topics. They criticize climate scientists for not incorporating positive feedback loops into their models (more on this later) and recently expressed their concern about the devastating potential of clathrates.

The IPCC defines a tipping point in its Special Report 1.5°C as follow:

« A level of change in system properties beyond which a system reorganizes, often abruptly, and does not return to the initial state even if the drivers of the change are abated. For the climate system, it refers to a critical threshold when global or regional climate changes from one stable state to another stable state. »

Given that we are dealing with a positive feedback loop, we can think that there is a point beyond which the machine can go wild.

However, in their last report (AR6 – FAQ 5.2), the IPCC estimates that, based on projection, permafrost thaw could last for hundred of years and « causes extra warming strong enough to be considered but not enough to lead to a runaway of global warming, during which permafrost thaw would cause a spectacular acceleration and self-reinforcing of global warming.. » For once, we are feeling a bit better!

A colossal crater in Siberia?

Recently, the potential impacts of methane clathrate destabilization have received much attention in the news, especially with the appearance of a giant crater in Siberia last spring. And this may have kept the more informed of us awake at night!

Clathrates are methane hydrates. They only form at great depths. They can be found:

Regarding ocean clathrates, the problem is that these solids are only stable within a specific window of low temperature and high pressure. In the ocean, any warming of permafrost, ocean waters and sediments, and/or changes in pressure could destabilize them, releasing their methane (CH4) into the ocean. In larger and more sporadic releases, a fraction of methane could also be discharged into the atmosphere. But this destabilization is happening quite slowly. Moreover, before reaching the sea floor or the land surface, methane diffuses slowly into the soil, and is usually converted into CO2 by bacteria during the process – which, as a reminder, is a much less harmful GHG than methane.

As far as deep soil clathrates are concerned, they are found in areas of permafrost where organic matter has accumulated over hundreds of million years, known as the Yedoma. These areas are still relatively poorly explored as very deep drilling would be required (about 100 meters!), which is very expensive and extremely complex. But these explosion phenomena – although spectacular – are very localized and, here again, methane is often transformed into CO2 before it reaches the surface.

Either way, the IPCC considers that :

Can climate models anticipate the impacts of permafrost thaw on the climate?

Climate models are widely criticized for not taking into account permafrost thaw. Yet, since the AR5, this issue has been widely integrated into the models. However, even though the knowledge is steadily increasing on the subject, the complexity of the areas and processes involved generates significant uncertainties:

This way, if the land sinks and is flooded by lakes and wetlands, more methane may be generated.

Last but not least, the interactions between snow and permafrost. Indeed, the following processes interact with each other, though probably in different ways depending on the regions:

With all these uncertainties, it is understandable that climate models struggle to integrate the various parameters influencing permafrost thaw. Furthermore, the snow modules of climate models are derived from alpine snow models, which do not reproduce Arctic-specific processes.

Moreover, much less data is available (stuff we feed the models with!) on the Arctic zones than on the temperate zones. There are also far fewer scientists working on the physical processes in this area than in temperate or equatorial zones.

For example, in some areas, we can obtain GHG flows, but since global coverage in time or space is missing, we have to make several hypotheses and approximations. In chapter 9 of the AR6, scientists consider that ” there is high confidence that coupled models correctly simulate the sign of future permafrost changes linked to surface climate changes, but only medium confidence in the amplitude and timing of the transient response. “