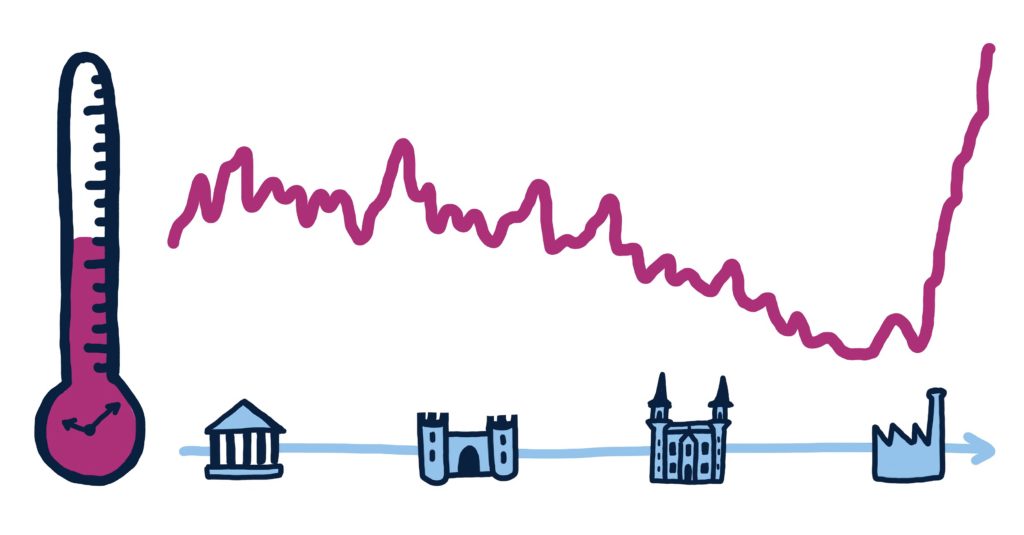 Myths on climate still remain and persist in the public sphere.

Given the climate emergency, and in partnership with the National Institute of Sciences of the Universe (INSU), we would like to demystify some cliches about climate change and propose instead scientific knowledge to a wider audience.

Every climate myth will be treated in an article. These articles will refer to several scientific publications and aim to dispel certain doubts and objections.
Following our first article on the scientific consensus on climate change, we wanted to have a look at climate in the past and the underlying causes of climate change.

In the past, the Earth’s temperature has seen warmer periods than today. Under this premise, how can scientists say with certainty that current changes are due to human activities (or anthropogenic) ?

To answer this question, we have received previous help from Pascale Braconnot, CEA researcher at the Climate and Environment Sciences Laboratory (LSCE).

What do we know about past climates ?

For the last 600 million years, the average global temperature was about 10 degrees higher in comparison to today’s climate. During that period, there have been four relatively cool periods, forming smaller and lager glaciers in the polar and temperate zones.

On a global scale, the Holocene has proven to be climatically quite stable but has not been devoid of fluctuations, as shown by the period during which the aridification of the Sahara occurred. At the onset of our millennium (between the 11th and 13th century), overall temperatures were quite high (the medieval optimum) and then came a period of general cooling that occurred from the early 14th century through the mid-19th century: the little Ice age.

Since the 19th century, there has been a global warming. During the 20th century, the average temperature in France increased by about 0.1°C per decade, and there is a clear trend towards an acceleration. According to the IPPC’s fifth report, every decade since the eighties has been significantly warmer than any decade since 1850. The period between 1983 and 2012 was probably the warmest in 1400 years. Based of reconstruction models, we know that the current climate change is happening at a much faster rate than it has in the past 10,000 years. It’s also more persistent than the during past deglaciations.

How do we reconstruct past climates ?

Large meteorological measurement networks have made it possible to monitor the evolution of the climate for the last 150 years. Before, rocks, sediments, ice caps, and various fossils are our main sources of information on past climates, named paleoclimate. These natural archives are collected from the soil, lakes, peat bogs, oceans, or ice. Step by step, scientists have developed ever more precise methods to date these precious clues. Some archives, like tree or coral growth rings, are exact to the year and season !

Using paleoclimatic records, we can also learn about volcanic activity, land-use change (deforestation or the spread of agriculture) and the atmospheric composition, estimated from analyzing air or aerosol bubbles trapped in polar ice cores.

How do we explain these past climate changes ?

The driving force of climate is solar radiation on the top of Earth’s atmosphere. The climate system and associated weather, which varies from region to region, is associated with complex interactions between the oceans, the land, the sun, the ice and the atmosphere. On a global scale, climate change linked to external factors (variation in solar activity, volcanic activity, anthropogenic greenhouse gas emissions), leads to a disturbance of the balance between solar radiation absorbed by the Earth and the thermal energy that the Earth reflects back into space. This change in the Earth’s energy balance is called radiative forcing. The resulting heating effect is generated by an energy surplus added to the climate system (positive forcing); for example an increase in solar radiation, a drop in the Earth’s reflectivity, or a greenhouse effect change, caused by CO2 emissions.

In the first case, we look at orbital (or astronomical) forcing or increased solar energy/radiation: Cyclical variations influence the Earth’s orbit (eccentricity), its wobble (precession) and axial tilt (obliquity). These parameters affect insolation, in other words, the amount of energy that reaches the top of Earth’s atmosphere. Orbital forcing is known a critical factor driving glacial and interglacial changes.. These cycles, known as the Milankovitch cycles, are periodic changes that occur at a frequency of several ten thousand years

Over periods of several million years, plate tectonics, which play a prevailing role in modifying oceanic and atmospheric dynamics, and have contributed to very important climate changes.

Finally, an increased greenhouse effect, linked to a higher concentration of greenhouse gases (including mainly CO2) in the atmosphere, can also explain hot periods. By trapping infrared radiation in the atmosphere, the greenhouse effect contributes to heating the climate. Carbon dioxide concentration can be modified by natural or anthropogenic processes affecting the carbon cycle and the way carbon is stored in the ocean.

During the Holocene, the current geological period, the impact of all natural forcings on climate has been relatively weak on a global scale compared to past large-scale climate fluctuations. For instance, in the Arctic, insolation peaked around 10,000 years ago. The obliquity and the precession of the equinoxes lead to a stronger seasonality (temperature differences between summer and winter) and therefore warmer summers, although average annual temperatures were comparable to those observed today. The continued decline in insolation in the Northern Hemisphere has led to a long-term cooling that peaked recently during the Little Ice Age. The difference in summer insolation between the beginning and end of the Holocene is estimated to be 40 W/m2 at 45°N.

Similarly, while solar activity could in the past partially explain the observed temperature variations, this is no longer the case since the middle of the 20th century, as shown by the fifth IPCC report.

Summing up, even though the Earth has seen warmer climates in the past, they were caused by natural forcings. Nowadays, changes attributed to natural forcings are small. In no way can they explain the evolution of the actual climate system, nor the pace of change. On the other hand, by changing the atmospheric composition and the Earth’s reflectivity, CO2, aerosols (fine airborne particles) and human land-use affect the Earth’s energy budget in a major way, which explains the observed evolution.

Eruptions do release CO2 and contribute to the emission of greenhouse gases. However, their impact varies widely: for example, in 2010 the Icelandic volcano Eyjafjöll’s daily CO2 emissions at the peak of its activity were 100 times less than China’s daily emissions the same year.

Furthermore, volcanic activity is primarily a negative forcing: during a strong eruption, volcanic ashes and sulfuric acid droplets present in the atmosphere reflect part of the sunrays back to space instead of letting them through. Some historical volcanic eruptions led to a global cooling, sometimes lasting several years.

Are humans responsible for climate change ?

To understand the link between human activities and climate change (also called anthropogenic forcing), we have to ask, whether the speed, intensity and global nature of the phenomenon could be possible, when taking only the natural evolution of the environmental conditions into account. Climate models give us part of the answer by reconstructing the observed signals and then estimating to what extent the various disturbances – natural or anthropogenic – explain the observed signal.

In addition, detection and attribution studies help to define whether observed climate changes are the result of natural forcings or human-induced perturbations. They also contribute to estimate the relative contributions of forcings.

To date, as shown by several studies, and synthesized by the IPCC, human activities are responsible for almost all of the global warming observed since the 19th century.

Understanding past climates gives us a better understanding of what is happening today. The rate of the current global warming is faster than the one observed during the last 10 000 years and during the previous glacial/interglacial transitions.

Previous warmer climates were due to natural drivers, which left their traces, allowing us to study them. In our current climate, natural forcings have a relatively weak effect. They do not explain in any way the observed evolution of climatic conditions, nor their rapidity. However, due to its fundamental role in changing atmospheric composition and the Earth’s reflectivity, CO2, aerosols (fine airborne particles) and human land-use affect the Earth’s energy budget in a major way, which explains the observed evolution.

Bonus : a super infography of this article on the CNRS website 😉