Why get out of the bubble effect and confirmation bias 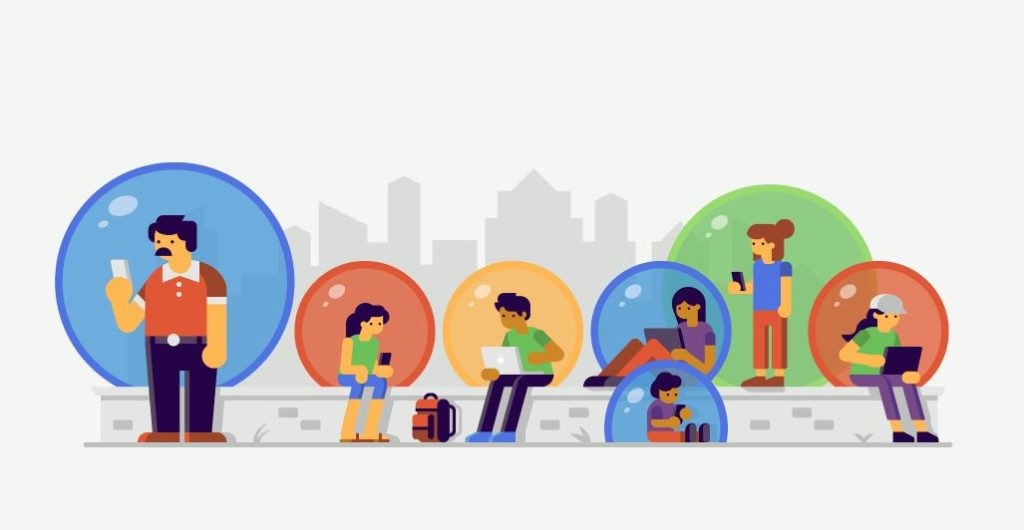 No one can escape it: the bubble effect is everywhere. Add to this a few confirmation biases, and you have the cocktail to ensure that your critical thinking never evolves. How is it possible that such bright, educated and informed people can sometimes deny facts that do not fit their beliefs?

Still in this utopian quest to be less stupid than the day before, I dug into the question. We will first go over some definitions, insisting on the perverse effects of the Internet and social media, before explaining why it is urgent to get out of the bubble effect.

Confirmation bias, the beginning of the bubble effect

There are over a hundred cognitive biases. A cognitive bias is defined as In this case, it is not possible to find a cause, a reason, a justification or a possible and conceivable explanation that leads to a shift or hindrance in the logical reasoning. In other words, it is a distortion of information at the cognitive level, i.e. at the level of mental processes mainly related to knowledge. Cognitive biases are numerous, fascinating and above all omnipresent‘.

The usefulness of a belief takes precedence over the truth or falsity of its object. Believing in something gives meaning to existence and influences our behaviour, even when the belief turns out to be unfounded. Not surprisingly, the more deeply held the beliefs are, the less tolerant they are of change. Thus, confirmation bias sometimes causes us to ignore information that contradicts our beliefs. Who has never turned a blind eye to information that challenged one of their opinions?

Between laziness, fear and dishonesty

Strictly in terms of energy expenditure, favouring information that confirms our way of thinking is much less demanding than questioning it. Why bother, when you know it will be unpleasant? Thus, in addition to a certain physical laziness, there is also an intellectual laziness. We will tend to look for examples that confirm our worldview, with examples that are mostly easy to find.

Let’s illustrate this with an example, where the way we search is absolutely subjective, always with a view to proving our initial belief right (rather than whether it is correct):

A final point on confirmation bias. During the lockdown, we saw a multitude of public outings by Jean-Michel CAC 40 and some collapsologists (with thousands of followers) announcing in March 2020 the ‘end of the financial markets‘ ‘fuck I told you it’s the collapse, we’re all going to die, I was rightnnnn‘. This is part of the flaw in confirmation bias: we are too quick to want to be right, we share an article we don’t really understand, where the title is enough because it goes our way. Richard Monvoisin explains it very well in this video.

PS: announcing ‘a collapse’ without giving a date or an exact perimeter is like announcing a financial crash without saying where, on what and when: it is useless.

If we were to define the bubble effect simply, we could say that it is similar to homophily: ‘the tendency to affiliate with one’s peers‘. The tendency to prefer to have relationships with people who are similar to ourselves. It is extremely difficult to get out of it, for the simple reason that it starts at a very young age: at school, during your holidays, and then at work, where you will end up only going out with your colleagues and always discussing the same subjects. Like the echo chamber phenomenon, the bubble effect reinforces our beliefs and makes us unable to take a critical and constructive look. Moreover, we become less able to discern good from bad information. This social and ideological comfort has, not surprisingly, been reinforced by the Internet.

We might have the reflex to think that the Internet has opened us up intellectually. Of course. But that’s without taking into account the rise of GAFAM and social media, which have turned the way we get information upside down. For example, 60% of Generation Z gets its information exclusively from social media. This gives you an idea of the power of the algorithms that decide for you what kind of information will appear in your news feed.

The trend over the last decade has been towards ultra-personalisation. Of course, it has its good points. But what interests us here is above all the reasons for this ultra-personalisation, and its perverse effects. It is used almost exclusively for economic reasons. By increasing the click-through rate of a piece of content, by increasing the time we spend on a news feed and the potential for interaction with an ad, the big digital players increase their advertising revenues. This is how filter bubbles came about.

Eli Pariser and the filter bubbles

Conceptualised by Eli Pariser in 2011, filter bubbles theorise the impactthat the over-personalisation of content by algorithms on social media can have on the internet user, locking him or her into a kind of intellectual and informational isolation bubble.

Another example given by Eli Pariser via Facebook: the more you ‘like’ right-wing comments, the less left-wing content you get. The less left-wing content you have… the more you will strengthen your right-wing positions. Worse, in a closed Facebook group, because of the lack of contradiction, the extreme elements tend to push the majority to think like them. As a result, once you are entrenched in your positions, the debate will be made very difficult. The opposition of ideas becomes a discourse of deaf people, sticking to their ideals reinforced by the filter bubbles. The vicious circle is complete.

Of course, these filter bubbles have their limitations. The concept itself is reused in all sorts of ways, and it is very difficult to apply a valid concept in the long term today. Algorithms change so fast that by the time social impacts are theorised, algorithms will have already changed.in the long run today. To learn more, I recommend watching this interview with Tariq Krim on Thinkerview.

Why get out of the bubble effect

First of all, getting out of the bubble effect will help your critical thinking. It is extremely hard to get out of confirmation bias, and this is probably the best reason to get out. Once again, no one is exempt. From financial wanker to anti-nuclear Greenpeace activist from birth… Not to mention some of our politicians, who despite their diplomas and careers, are sometimes completely out of touch.

For example, I found very interesting Eli Pariser’s proposal at his TED talk that we should be able to sort our Facebook news feed according to several criteria, including relevance, but also ‘stimulating’, ‘disturbing’, ‘other points of view’ news…

It is through debating with people that we improve our own thinking and arguments to respond/refute a person more quickly. It is through daily (and I mean daily) debate that I have sharpened my critical thinking skills. Without having heard all the possible excuses for climate inaction, I would not have known how to respond. Without having heard Nicolas Bouzou’s nonsense about degrowth, I would never have worked so hard on the subject.

Now we come to the heart of the article, the reason why getting out of the bubble effect is important. Avoiding the bubble effect means get out of its bubble. Getting out of your comfort zone. I am lucky enough to be surrounded by brilliant people, yet they will not confront their ideas with others, simply out of disinterest in debate or fear of wasting their time. However, this is where you will have an impact. Convincing yourself in your bubble of friends that you should aim for sobriety and that green growth is a utopia is all very well… but not enough! Going to debate with people who think the IPCC is a 70’s rock band will be much more effective! At the risk of repeating myself: every person who comes out of denial counts. Every month counts. Every effort counts. The disasters that are coming deserve that everyone sacrifices a little of their comfort.

We are all victims of the bubble effect and confirmation bias at one time or another. Getting out (at least once in a while!) is a necessity, especially if you want to advance your thinking on a topic. Cross-check your sources, compare them, and I can’t say it enough: beware of GAFAM. A huge majority of people using Facebook and Google have no idea how the data is used. Given the democratic stakes involved (US elections since 2012, French elections in 2017), these algorithms carry considerable weight and I regret to say that ethics are all too often overridden by financial interests. If you want to delve deeper into the subject of engineering ethics, I invite you to read Cathy O’Neil‘s book ‘Weapons of Math Destruction’.

Finally, for those of you who want to speed up the fight against climate change, you know what you have to do. Debate, debate, get out of your comfort zone: the green growth carpetbaggers will soon be a thing of the past.