The 5th planetary boundary has been officially crossed (and nobody cares) 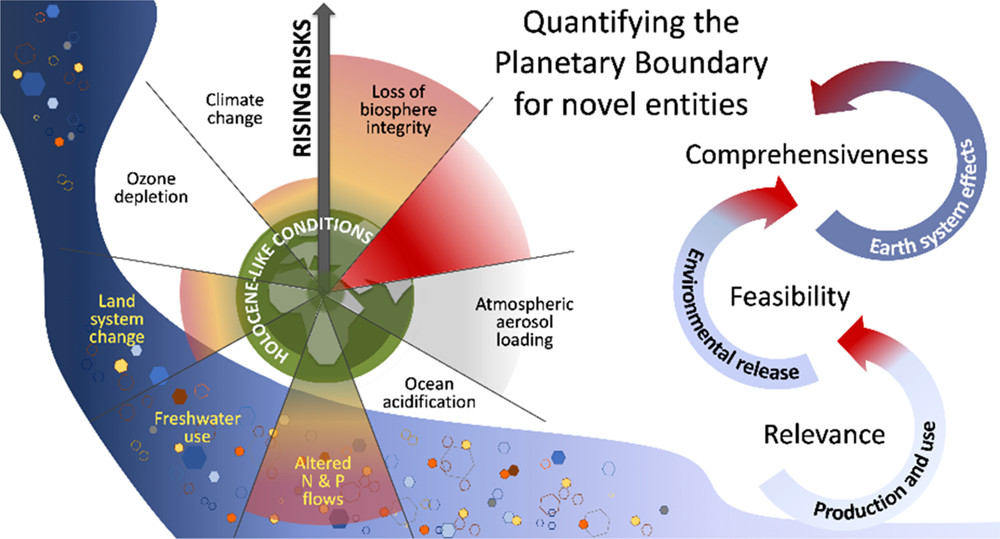 On 18th January 2022, a catastrophic news just fell. Scientists from the Stockholm Resilience Center (SRC) confirmed that we have crossed a 5th planetary boundary : the “chemical pollution” boundary or “introduction of novel entities into the biosphere“. The 5th, on the 9 identified planetary boundaries.

However, this news was fully unnoticed. In France, no mainstream media dedicated time to it, preferring to debate on the latest Zemmour’s release or on the Jean-Michel Blanquer’s holidays. A strong impression to experience the movie “Don’t Look Up”, or to relive the release of IPCC report, when medias preferred to focus on Messi. We are just talking about a threat to the stability of the world’s ecosystems whose humanity depends on.

Before going into details, let’s define what a planetary boundary is. In year 2009, Johan Rockström led a 28 international scientists’s group in order to identify the processes that regulate the stability and the resilience of the Earth system. They will propose a quantitative measure of the planetary boundaries within which humanity can keep developing and thriving. Here is the result in year 2015 :

The planetary boundaries therefore answer this question: “up to what limits will the Earth system be able to absorb anthropic pressures without compromising the living conditions of the human species ? ».

Planetary boundaries are not as simple as at first sight…

Boundaries provide a fairly rigorous quantitative and qualitative framework on the environmental impacts of our societies. Crossing these ecological boundaries is tantamount to exceed the sustainability limit of our environment and invites us to modify our ways to produce and to consume. These limits are beginning to be recognized and considered by numerous organizations and States (UN, UE, France), even if they raise criticisms, like any model.

Some important subtleties to remember :

The fifth planetary boundary to be officially exceeded is the one called chemical pollution or “novel entities” – created or introduced by Human beings. You can find both names used, chemical pollution being more meaningful to the general public (and preferred by Kate Raworth for her doughnut). Thanks to their works, researchers managed to quantify the introduction of novel entities into the biospehere and thus concluded that a new planetary boundary was crossed. Here is the new updated graph :

On social networks, the scientific community has unanimously alerted on the seriousness of the situation. If it was still not clear, the reaction of Olivier Fontan, former executive director of the High Council on Climate, is unequivocal : “we are dying of suffocation from our chemicals and plastics“.

Some orders of magnitude getting you dizzy :

Stop the massacre before it’s too late

“Some of these pollutants are found all over the world, from the Arctic to the Antarctic, and can be extremely persistent. We have overwhelming evidences of their negative impact on terrestrial systems, in particular on biodiversity and biogeochemical cycles”, saidBethanie Carney Almroth, one of the study authors. It is therefore perfectly possible today to pollute the Antarctic and to trash the summit of Everest without our political leaders being worried.

One thing is certain, we don’t realize what is happening to us. We already have an ocean of plastic, but some would like to produce more, always more, hoping a technological miracle will come. For too long unfortunately, politicians and industrialists have been deceiving the population with their circular economy, whose limits has long been known and demonstrated in scientific litterature.

It is urgent to stop believing that circular economy is a panacea for everything. Yes, we have to move towards an economy more circular, with a significant improvement in recycling and efficiency of production processes. But above all, we have to radically reduce the production leading to this chemical pollution, especially in the northern countries. It’s a matter of survival.

In other words, there is nothing to expect from the green growth, neither the blue growth nor the production ecology. Do we really have to wait for the nine planetary boundaries to be crossed to finally understand that this is leading us a little more each day towards a climate disaster and that we have to change this deadly capitalist and productivist system ?

Should we trust the industrialists, oil and gas companies first, who spend millions in communication to explain that the only solution is recycling and not to reduce pollution ?

Every day of climate inaction is another chance to get some bad news. This is the case with this officialization of a 5th planetary boundary crossed, at the rate we’re going, there is no reason we can’t hit a grand slam.

In a world in which we would take the ecological crisis seriously, this scientific publication would have made the front page of every newspaper. But there is always something more urgent, more important, more profitable than climate. The situation is catastrophic, and the immense majority of medias and politicians addicted to green growth are only making it worse. How many warnings, scientific reports, movies, hunger strikers or climate activits in jail will it take for the medias to take up the subject?

It’s time to collectively understand that there will be no profit on a dead planet and to plan the progressive exit from fossil fuels, the only solution to respect our climate commitments and hope to limit warming to +1.5°C.