Should we expect more megafires because of climate change ? 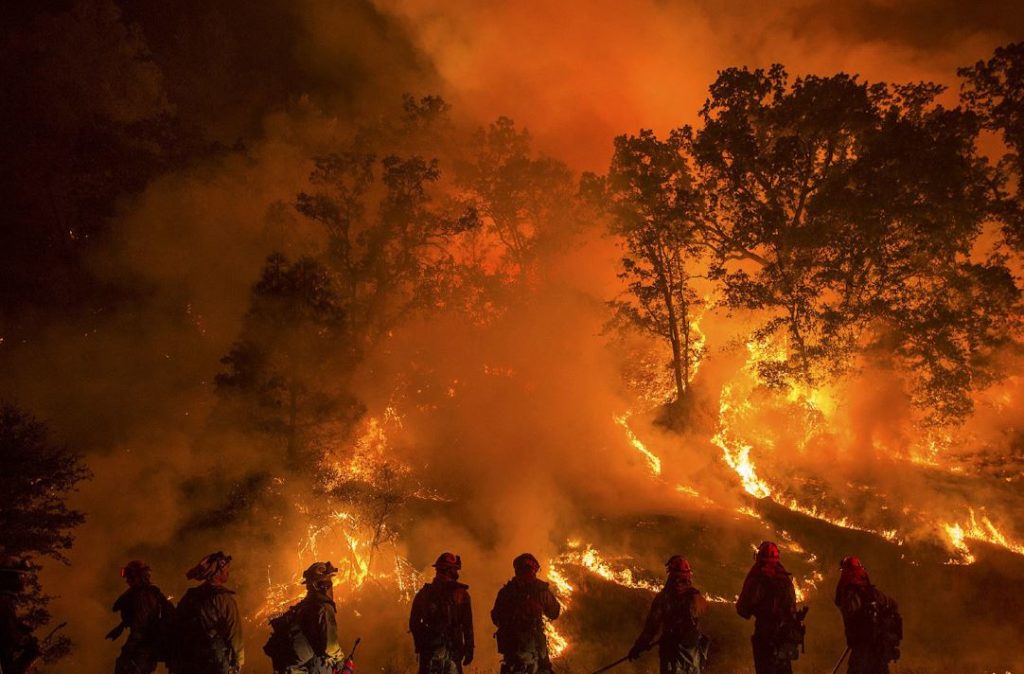 California, Siberia, Australia…spectacular images of megafires raging on different continents invaded our screens in 2019 and again in 2020. Close to home, Greece suffered from one of the most devastating wildfires on the European continent (102 deaths). Then we saw Latvia and Sweden burn all the way up to the polar circle… and in 2020, Portugal was scorched.

What about France ? The summer of 2003, one of the hottest ever recorded in Metropolitan France, gave rise to a historic wildfire season with nearly 60,000 ha burned in the south and 10 fatal accidents ! In summer 2019, exceptional heat waves were also accompanied by multiple fires in the southeast, but also in the north of France. A total of 10 000 hectares burned.

What role does climate change play in these gigantic fires ?

In partnership with the National Institute of Sciences of the Universe, we wanted to explore the subject of megafires more closely. Sophie Godin-Beekman, scientific deputy director at the INSU-CNRS and researcher at the Atmospheres, Environments and Spatial Observations Laboratory (LATMOS), and Solène Turquety, academic teacher and researcher at the Dynamic Meteorology Laboratory helped us on this issue.

What is a megafire ?

A megafire is ” a pyro-convective phenomenon overwhelming capacity of control (fireline intensity currently assumed over 10,000 kW/m and rate of spread over 50 m/min), exhibiting spotting distance >1 km, and erratic and unpredictable fire behavior and spread. It represents a heightened threat to crews, population, assets, and natural values, and likely causes relevant negative socio-economic and environmental impacts.”.[i]»

Defined by their intensity, their duration and their uncontrollable nature, megafires are present on all continents, including near the Arctic Circle. Sometimes several fires merge, as was the case during the 2019-2020 Australian summer.

Another one of their characteristics is that they are self-perpetuating: smoke from the fire rises very high in the sky, and – when entering in contact with cold air – forms pyrocumulus and pyrocumulonimbus clouds, charged with electricity. These cause gigantic thunderstorms, with little or no rainfall … but with a high potential for producing lightning. These lightnings can set off even more fires.

How to measure and observe fires ?

At a global scale, the burnt areas are estimated from satellite data, evaluating the number of active fires by observing the Earth’s surface at different wavelengths, and gathering information on vegetation cover.

The spatial evolution of wildfire risk is evaluated from the Forest Weather Index, the FWI (used in most countries) which indicates a probability of occurrence. The higher the FWI, the more meteorological conditions are favorable to fires.

This index is calculated daily, using basic weather data: temperature, air humidity, wind speed and precipitation. These data supply a digital model that simulates the hydric conditions of the vegetation and what it means for meteorological fire hazards. Météo-France calculates the IFM every day in France and sends it to civil security.

What do we know about the past ?

Thanks to measurements and analysis of charcoal microparticles produced by fires and preserved in sediments deposited in lakes and bogs, we have a sedimentary record that documents the history of vegetation, climate, and past human interactions with these fires.

Therefore, we know that, at the start of the Holocene, about 12 000 years ago, there were large-scale fires. We can link these past meteorological conditions to the Earth’s orbital parameters, which are very different from those observed today, as we have already mentioned in a previous article.

Around 7000 years ago, thanks to a more humid climate, fires became much less frequent and occurred on a much more localized level. Sedimentary charcoal records across six continents and spread out over two millennia show that on a global scale the burning of biomass decreased until 1750.

Historical records constructed as part of the IPCC modeling exercise show that fire-related carbon emissions have been stable since 1750 on a global scale. Emissions linked to fires in Africa, accounting for more than half of global emissions between 1750 and 2015, have gradually decreased since the 1950’s due to land-use change, transforming the savanna into agricultural land. However, this decrease was compensated by an increase in other tropical regions.

Based on 35 years of meteorological data, a recent study analyzed four variables that are important to the seasonal length of fire weather: maximum temperature, relative humidity, rain-free days and maximum wind speed.

The results show that, between 1979 and 2013, the seasonal length of fire weather has increased worldwide by nearly 20%, and the area affected by long fire weather seasons has doubled.

Another study, comparing these global and regional trends to predictions of climate and vegetation models, shows that:

Therefore, the observed trends depend on complex compensating effects that are difficult to take into account in models.

Why are there megafires ?

The most obvious driver of extreme wildfires that can be attributed to climate change is the rise in temperatures (see article on drought). The plants and soil dry out, which leads to an accumulation of flammable materials and allows rapid and large fire growth. This is particularly problematic in drought-prone Mediterranean climates, California, Australia, Canada or Siberia.

At this stage, however, the danger is still limited. To start a fire, a source of ignition is needed….and this source is often human (both on purpose or accidental!)…. Climate deniers therefore pretend that fires are human caused, and not related to droughts !

Is mankind partly responsible for the increase in megafires ?

Are there any other factors to blame ?

In Asia and Australia, we know that El Niño events are associated with lower precipitation and higher temperatures, and therefore high fire risks. However, a long-term trend attributed to climate change, notably in the South of Australia during springtime, has been observed, also a lengthening of fire weather seasons. Since 2015, fire risk has been higher than the average risk between 1970 and 2020.

What about the inversion of the Indian Ocean dipole?

Australian forest fires during the 2019-2020 austral summer are partly due to a combination of two meteorological events: an Indian Ocean dipole inversion (which is a regular event) and sudden stratospheric warming (SSW) over Antarctica (a very rare event).

Again, a recent study shows that climate change has increased by 30% the risk of extreme bushfire seasons in Australia, like the one in 2019/2020.

Why is correct to assert that the increase in fires is due to climate change?

In theory, megafires are rare events that occur approximately only once every 50 years.

The question is: would recent fire trends be possible without climate change? No, given that the occurrence of extreme wildfires – such as those in Australia – is nine times more likely in today’s climate compared with the climate of 1900. The probability occurrence of wildfires like in Siberia is even 600 times higher.

What is the impact of these megafires?

First and foremost, megafires have an impact on the biosphere

In Australia, they burned nearly 100,000 km2 of vegetation, which is considered habitat for more than 800 species of vertebrates. Around 70 species had 30% of their habitat destroyed. Among those, 21 were already threatened with extinction.

By emitting large quantities of fine particles (PM2.5), including soot and poly-aromatic compounds, listed as carcinogenic by the WHO, megafires impact human health. PM2.5 concentrations of several hundred μg/m3 were observed, which substantially exceeds air quality standards of 25 μg/m3, potentially leading to adverse health impacts. Exposure to fine particles from wildfires has been associated with multiple health problems, mainly respiratory, such as chronic lung obstruction, asthma and cardiovascular diseases.
The transport of particles thousands of kilometers away from Australia can be viewed on NASA animations and allows us to observe changes in the global composition of the atmosphere: confined bubbles charged with soot particles ascended to the stratosphere up to 35 km altitude and locally destroy the ozone.

Australian megafires during the 2019/2020 season emitted around 900 megatons of CO2. Siberian fires during the 2020 summer emitted 244 megatons of CO2... This divides by half the 7% decrease in CO2 emission in 2020 compared to 2019, associated with the COVID pandemic. In addition, the fumes ascended to the stratosphere, which is the second layer of the atmosphere (between ~12 and 50 km), and had an impact higher than all moderate volcanic eruptions of the last three decades. The impact of this increasing number of wildfires on the stratosphere will need to be incorporated in climate models seeing that wildfires are likely to become more frequent and larger in the future.

What are the future projections ?

Due to the increasingly frequent occurrence of extreme events, such as drought or heat waves, the IPCC report of 2019 predicts an increase in forest fires, particularly in Northern America and Southern Europe.

The annual burnt area is projected to increase by a factor of 3 to 5 in southern Europe compared with the present under the RCP 8.5 scenario by 2100.

In 2010, Météo-France published a report studying the impact of climate change on the MFI. The simulations point to a steady increase in the frequency of days with meteorological fire risk, as well as a lengthening of the fire season (starting earlier in spring and ending later in autumn).

In 2010, a study of the exposure of French forests to fire has shown that the surface of forests exposed to fire, currently located in the South-East of France, could expand by 30% by 2040 and cover a significant part of the Landes forest. This extreme risk could even extend to the forests of Sologne and the Vosges by 2060.

Scientists from Météo-France crossed this meteorological fire risk with maps of vulnerability to forest fires of the main forest stands, established by the Office National des Forêts (ONF) and the Inventaire Forestier National (IFN). They were able to produce maps of potential vulnerability to summer wildfires for the short (1989-2008) and medium-term (2031-2050).

Temperatures will continue to rise even in optimistic scenarios (such as the warming target = 1.5°), therefore the intensity of fires will also increase.

The recent extreme wildfires in Australia have left their mark on us forever. Drought and high temperatures, which are exacerbated by climate change, are the main drivers of these fires. These megafires had devastating consequences on the environment, on biodiversity and on our economy.

Even if they can be partly linked to climate phenomena such as El Nino or the inversion of the Indian Ocean dipole, all projections agree that they are bound to become more frequent and more intense.

The means of prevention and fire fighting will have to change drastically in the next thirty years to face this increase in fire hazards. This is also the case in France, especially in regions where local populations are not yet concerned by fires and are therefore less prepared.

Bonus : check out this infographic on the CNRS website !