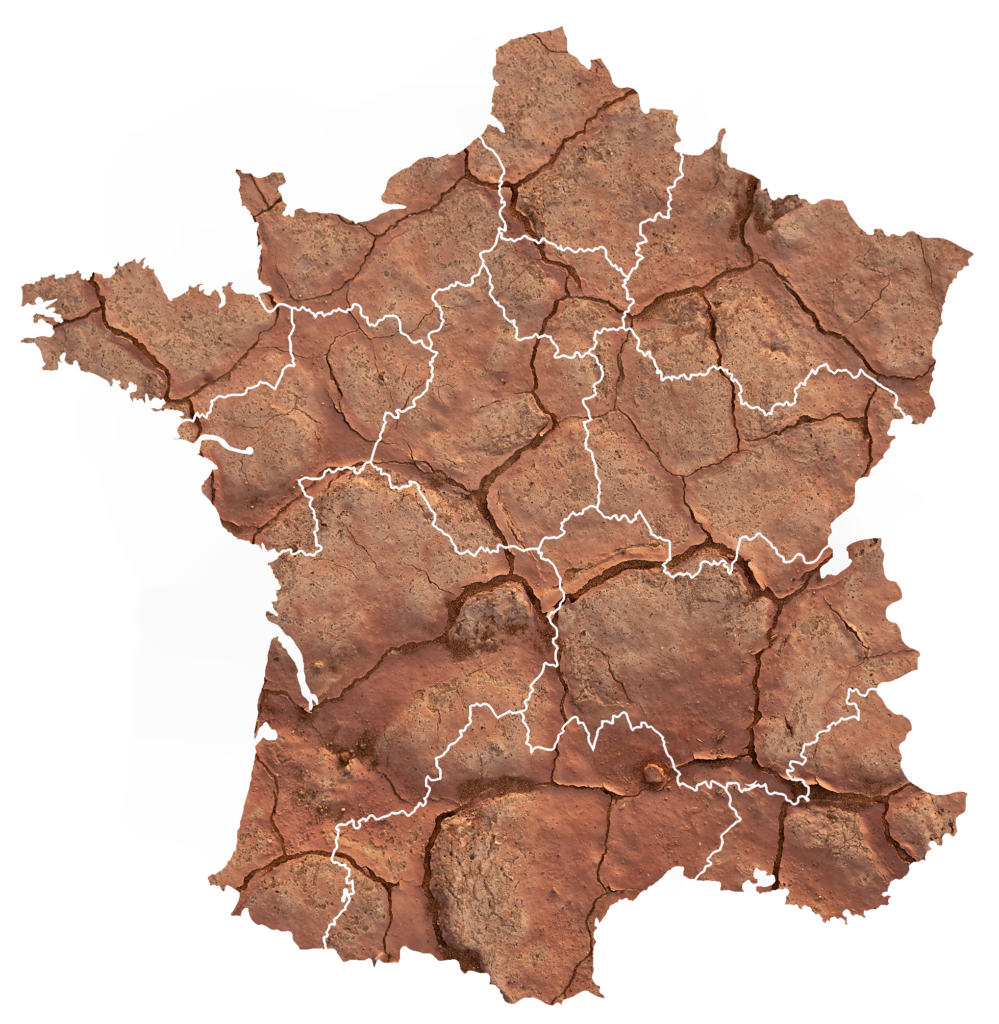 Global warming leads to significant changes in yearly rainfall in different regions. Thus, since the 1970s, we have observed that the Mediterranean, Southern Africa, South Asia, and the Sahel are experiencing longer and more intense droughts. In France, the last 3 years (2018, 2019 and 2020) have left their mark, each surpassing drought records. Even regions where they were previously quite unusual, such as the Grand Est region, have been affected. Both more frequent and more intense, these droughts have major repercussions on both vegetation and soils… They will also have major impacts on our lives, even in France.

In partnership with the National Institute of Sciences of the Universe, we wanted to take stock of the drought. For this, we received the help of Yves Tramblay, IRD researcher at HydroSciences Montpellier (HSM).

Drought is a period of abnormally dry weather that is long enough to cause a serious hydrological imbalance. More precisely, we speak of:

The number of days without rain leading to a hydrological drought varies greatly depending on the climate and the season, the nature of the soil, or the vegetation in place. The onset of a drought is also influenced by previous seasons. An exceptionally low winter recharge greatly increases the risk of drought occurring in the following summer. Extreme droughts can also result from repeated rainfall deficits over several consecutive seasons.

Water deficits are the result of complex interactions between weather abnormalities, land surface processes, and human water storage. In today’s human-modified, or Anthropocene, world, the status of water supplies and flows have become dependent on both human and natural processes.

How is drought observed and measured?

We rely on the measurement networks of the meteorological stations, allowing us to measure precipitation but also evapotranspiration (estimated via temperatures, air humidity, wind, and solar radiation).

Because of its missions, Météo-France monitors all droughts through the quantification of rainfall deficits observed by an important network of precipitation measurements and atmospheric analysis systems. In addition, Météo-France uses a soil water balance monitoring model, Safran-Isba-Modcou (SIM), to better understand the consequences of rainfall deficits with evapotranspiration. In particular, SIM allows the calculation of a soil moisture index every day. About ten years ago, the Climsec project set out to build reference databases for the period 1958-2008 for three components of drought: rainfall, soil moisture, and river flows. They defined indexes to evaluate the intensity of the corresponding droughts. In 2011, these indexes were adapted for operational hydrological monitoring.

Many time series are also derived from satellite data. Some of them exceed 30 years. They give us elements of a global understanding of the drought phenomenon and its consequences. Indexes for metropolitan France at the scale of the region are available in particular via the FREDI web platform. They illustrate the drought situation of the last twenty years on a monthly scale. These data show in particular theexceptional character of the drought of the last summers, quite generalized on the whole of France. The graph below shows the situation in the Centre region.

What do we know about the past?

On a millennial scale, paleo-climatic data (tree rings, lake sediments, pollens, animal fossil records, isotopic data) confirms that these drought episodes are of greater magnitude and duration than those observed during the 20th century. These data provide evidence that precipitation can change abruptly. There is undoubtedly regional variability that follows major climate cycles.

However, not only is it unlikely that this variability is homogeneous on a global scale, but above all, we know that the organization of our current societies would not withstand these past droughts.

How is the drought evolving and will it evolve in France?

Drought has progressed in the Mediterranean region. Thus, the climate of the region of Béziers and Montpellier has become semi-arid; cities like Toulouse or Millau have become Mediterranean. It is considered that France is now 15% Mediterranean and that it will be 50% Mediterranean by the end of the century.

The trends observed in meteorological droughts are part of the long-term variability observed for nearly a century. Indeed, there were remarkable episodes before the great drought of 2003, for example in 1920. On the other hand, the rise in temperature (which increases evaporation) combined with the fall in precipitation, has caused much more significant soil droughts in recent decades.

This phenomenon varies from one region to another. The northwestern quarter of the country, which includes Brittany and Normandy, remains rather preserved in terms of soil drought. On the other hand,the East and the South of France show more alarming signs of aggravation.

France and drought in the future

Evolution of the intensity of the phenomenon

The ClimSec research project, mentioned above, has made it possible to project the impact of climate change on droughts in metropolitan France.

A typology of droughts expected in the coming decades, under the effect of climate change and in relation to the current climate has been established by comparing the result of new simulations with the reference state reconstructed over the last 50 years.

– For the first trimester of the 21st century, the changes identified by the different models are variable and not very pronounced for meteorological droughts, even if the probability of drought occurrence is higher whatever the season.
– In the middle of the century, changes in rainfall patterns are still not very noticeable, but the drying of surface soils is intensifying and unusual phenomena in terms of spatial extension and/or intensity are beginning to appear throughout France. An extreme agronomic drought by today’s standards, such as that observed in 1990, may be frequently exceeded.
–In the 2080s, there will be a strong probability that a large part of the territory will experience very long soil droughts with almost no return to the current climate situation. These extreme soil droughts will occur in all seasons.

Space evolution of drought in France

Some regions (especially the Mediterranean and highland areas) could experience the most marked changes in soil drying.

But, surprisingly, it is the regions with the wettest soils on average today (North and North-East in particular) that could experience the strongest changes in relation to the current climate. Indeed, due to the rise in temperature, trees and plants draw more water from the soil through their roots (water that is then evaporated from the leaves), which reduces the amount of water that can infiltrate. This additional evaporation will not be compensated by increased rainfall in this part of the country. In the southern part of the country, it will even add to the effects of a decrease in average precipitation, which is very marked during the summer.

Are humans responsible for this evolution?

For once in this series of articles, we will not venture to assert the impact of anthropogenic activity on precipitation variability, and thus meteorological drought! It is indeed difficult to distinguish trends in precipitation due to decadal variability or long-term climate change.

On the other hand, soil droughts and hydrological droughts are closely linked to rising temperatures, which are linked to human activities. Moreover, climate change amplifies the consequences of drought, as will be seen below.

The answer to this question is therefore both YES and NO, and it is much more complex than generally presented.

What are the consequences of drought?

The first consequences we think of are obviously the shortage of drinking water(it is estimated that the level of groundwater should drop by 10 to 25%, on average in metropolitan France) and those of vegetation. But the consequences are much broader and also affect the soil, the population, and even our energy resources… Here are the details:

Drought and climate, a vicious circle?

As is often the case with climate change, vicious circles are set up, which cause the machine to go haywire!

Ultimately, drought itself exacerbates global warming.. It is a positive feedback loop.

By accentuating existing hydrological contrasts, particularly in terms of precipitation, global warming should lead to an increase in droughts in some regions. However, we must not believe that drought only affects warm countries! Drought is already affecting and will affect the vast majority of France.

Climsec predicts that in terms of soil drought, the “normal” situation in France at the end of the 21st century will correspond to the currently known extreme points. Even if there are many uncertainties, the trend of the models is very clear. Will our current societies be able to manage this phenomenon?

BONUS: find this article as a computer graphic on the CNRS website!