Is professional sport an ecological nonsense? 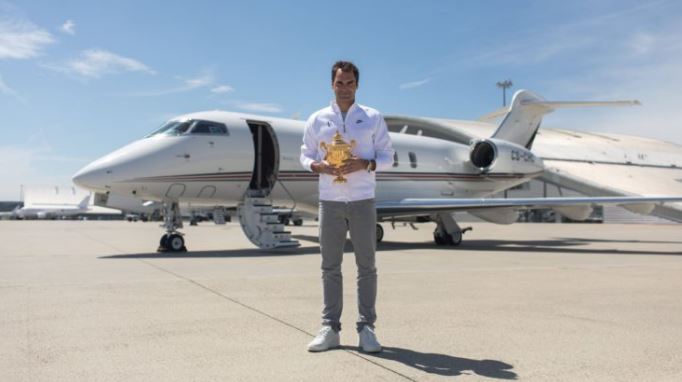 In the category of denial number 346, I would like the little brother of the singer please : the professional sportsman. There are millions of us who admire Federer, Messi and Ronaldo. Millions of people are excited about the Champions League, the Olympic Games, the World Championships of our favorite sport… And yet. I have some very bad news: for Roger Federer to continue to thrill us, it would take dozens of planets to support his carbon footprint.

Do you admire the way Lewis Hamilton attacks his turns ? Well Lewis, he’ll have to go back to the pit. Let’s try to put our cognitive dissonance aside and take a step back, even from those who thrill us. In the next world, should professional sport disappear?

You mare annoying, with your environment!

And yes, this is starting to be a lot. Less meat, less flight, less Amazon, and now less professional sports? The famous entertainment society so dear to Noam Chomsky, where one entertains to dominate, will take a blow. We are overloaded with entertainment, and professional sports are a very good example of this. You can easily put your butt on the couch Saturday at 1pm, and finish Sunday night at midnight. As a soccer fan, you can even push the logic to every night of the week (I have a good friend whose cousin has a nephew who loves soccer, who confirms).

Let’s leave aside, exceptionally, the societal problems raised by professional sports. Knowing that a guy who kicks a soccer ball is a billionaire, vs. a farmer who struggles to make a salary, is a real problem. But what interests me here is the carbon footprint of these sports, and the carbon footprint of some athletes.
Of course, when I talk about a high-level athlete, I am talking about a person who lives it. I’m not talking about Yannick who found his passion for jogging during the COVID-19.

A rethink is necessary. Does professional sport, as it is now, still have a place in a world of energy contraction? How long will we allow a Federer to fly every week to play a tournament in another country? How long are we going to accept that European soccer clubs go to promote themselves one week in Asia, one week in the United States, and the next week in Qatar?

There will be no easy choices, especially if there are dire social consequences. This is a point that we have already made concerning skiing and its industry, mostly tourist, which provides a living for entire regions. Nobody can deny the health benefits of sport. On the other hand, the professionalization of sport is inevitably an issue that will have to be raised by our politicians in the famous ‘next world’. As impressive as it may be, I’m not sure that being able to drive a Formula 1 on the streets of Monaco is essential.

Should professional athletes be an exception?

Always with the idea that we will have to make choices and arbitrate as well as possible in a world in energy retraction, certain categories of people will benefit from a right pass. I am thinking in particular of doctors: if a helicopter flight makes it possible to save a life (rescue, or a heart to be transplanted for example), I find it hard to see society not accepting it, condemning it. On the other hand, can the high-level athlete benefit from advantages that other citizens could not enjoy?

Again, I use Federer as an example: I enjoy watching him play every time he is in Paris. But what does my neighbor, who not only doesn’t like tennis, but doesn’t care about it, think? Of course she finds it indecent and absolutely abnormal that Mr. Federer travels around the world to play his tennis tournaments, while we all have to stop or reduce flying.

In the same way as Nabilla, being a celebrity appears to be a duty of exemplarity. Can you imagine the influence that a Cristiano Ronaldo and his 220 million fans have on Instagram? While his activity already makes him a horror in terms of GHG emissions, what about the consequences of his salary, spent on cars that consume 30 liters/100km? Yes, he does what he wants with his money. Yes, “he’s not going to stop living anyway“! But what he doesn’t seem to understand, our friend Ronaldo, is that by “living” at his own pace, he stops the life of other people, in the present and in the future.

Slow sport as a solution?

To answer the 3 questions on high performance sport, there are some avenues of reflection that have already been undertaken in recent years. Some athletes, like Morgan Bourc’his or Sarah Guyot, member of the French Kayak team, have even questioned the fact of continuing their sporting career.

A sport-by-sport analysis will obviously be essential to answer these questions. I imagine that Beach-Volleyball will have much more chance to survive than Formula 1 for example… Even if in formula 1, there are also great comedians concerning carbon neutrality!

In his book l’âge des low-tech, Philippe Bihouix evokes the beginning of a ‘LCA’ for certain sports. Boxing or archery don’t have much to worry about. On the other hand, golfers may have to take up running…

Maybe in the next 10 years, travel for top athletes will be limited and they will have to live in the same place to continue their activity. European professional skiers will stop going to Latin America when there is no more snow in Europe. PSG players will no longer go to Asia for gala matches to promote the brand. There will simply be fewer competitions. Less travel, if any.

PS : this would certainly deserve a separate article, but E-sport is obviously concerned and suffers from the same shortcomings as other sports : money, competitiveness, always more : more powerful PC, faster connection… And the world events that obviously require players to cross oceans to play in a stadium… video games.

Qatar and the 2022 soccer world cup

Here is a very good example, which in the next world should be historic: the boycott of the World Cup 2022.

The spectacle offered by the World Athletics Championships last September in Doha, is that of a shipwreck. First of all, the climatic conditions. The competitions had been postponed to avoid summer burns. But with the stifling heat and above all the high levels of humidity (up to 60% and 70%), the events followed one another to the detriment of the athletes’ health, including at night, when the thermometer did not fall below 45°C. On the opening day, the women’s marathon resulted in 28 withdrawals.

Eight stadiums have been built in socially undignified conditions for the 2022 World Cup in the Persian Gulf country. No one seemed to care about the fate of the workers who built these infrastructures, sometimes at the cost of their lives. The human toll is high: one death per day on the construction sites. “According to Amnesty International, hundreds of laborers are still waiting to be paid for months and are sometimes deported if they ask to be paid.”

Needless to say that this event, in its current form and for all that it represents (financial, political, marketing issues…), is absolutely not compatible with a world that tends towards sobriety. I also have a confidence index of -352/100 for a country to play the role of Cassandra and boycott this world cup, if only for environmental (or even human…) reasons. May history prove to me that I am just a horrible, slanderous, pessimistic little person.

In its current form, professional sport is for the vast majority an ecological nonsense. First of all, because most of the time, these athletes have to cross the globe to meet the ever more demanding spectators who are thirsty for entertainment. But also because the societal usefulness of high level sport will have to be questioned in a world where sobriety is essential. No matter how much you love Leo Messi or Roger Federer, keep in mind that the cashier or the nurse who earns the minimum wage, whose job is not to be denied, may get a little annoyed when he sees Roger going from Paris to Doha and back for an exhibition tennis match.

Should sport go back to the way it was? A game, where fun and socialization are the primary objectives? Should we give up to watch Roger ? One thing is for sure, today’s heroes may be tomorrow’s zeros. Millions of people ‘like’ the photo of Cristiano Ronaldo in his underwear in his new Bugatti. But images can fade very quickly, especially in the age of social media. At the beginning of the year, Roger Federer had already been taken to task for having Credit Suisse as a sponsor, a bank that likes oil a little too much. As a result, he had made a donation to help against the fires in Australia. This could go very, very fast for these top athletes, who would do well, like all of us, to question their activity.