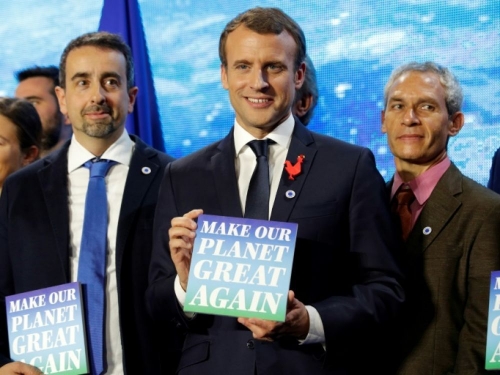 For months, and especially since the results of the first round of the 2022 presidential elections, many newspapers, and public figures have been repeating over and over again, sometimes out of desperation, that “the French don’t want ecology“. “The proof is that Yannick Jadot has only made4.6%.. It is a failure for ecology, they do not care!“

This interpretation of ecology is wrong. The reasons for this score are multi-factorial and do not translate the importance that has the ecology in the eyes of the French. They are ready to change. But this will not be done without some essential preconditions.

To say that the French do not want to make “any effort for the climate” is a very common speech. Sometimes among activists who are depressed because the transition is not happening fast enough. Sometimes it is used by climate delayers who will tell you that it’s all over anywayand to say otherwise is to be in denial.

I see the opposite. The French are willing to change, as long as it is fair. The word “fair” is very important here. You can’t ask everyone to ride their bikes if tax exiles are on their yachts. We can’t ask the French to take the train instead of the plane when the Prime Minister flies back and forth in a private jet to vote, or when the tickets are sometimes up to 5 times more expensive.

This lack of social justice is dramatic if we want a possible ecological transition. For almost 4 years, I have noticed it every day in comments, exchanges, and debates. It is systematic. Is this just an impression confined to a filter bubble? Not really, since we can see this in many other countries. This study shows, for example, that what is true in France is also true in 33 other countries. “Fairness and effectiveness are key criteria in the social acceptability of certain measures.”

This is well documented in the scientific literature. Failure to consider social justice in climate decisions is to ensure that it fails. This is true at the national level, as well as at the international level when it comes to recognizing that the responsibility for anthropogenic climate change is common but differentiated. The High Council for the Climate recalled this in its last annual report. The IPCC made it very clear in its 2nd and 3rd parts: without social justice, there can be no ecological transition.

Very often, conservatives and politicians who play the game of business as usualbrandishing the excuse of the “gilets jaunes” to show that “you see that the French do not want ecology, as soon as we propose a change they are in the street to demonstrate!” It turns out that one of the values most requested by the “gilets jaunes” was social justice. Priscillia Ludosky, an emblematic figure of the “gilets jaunes”, even accepted the idea of a carbon tax, but not just any tax:a fair, redistributive tax.

In other words: anyone who talks to you about ecological transition without social justice has either not understood what was essential, or is lying because they have a financial or power interest.

The need to set an example

One of the best ways to bring about change is to ask “what is holding it up”. Ask how far he or she can go, can and will change, and what would facilitate change.

Is it necessary to be blameless to alert on the climate emergency? Of course not. On the other hand, exemplarity is a powerful vector of communication and avoids ad hominem attacks. We had a very good example this week with an intervention of Marion Cotillard who spoke about ecology to Léa Salamé on France Inter. Result: hundreds of comments like the one below:

François Gemenne, lead author of the second part of the latest IPCC report, even thinks that “that’s why I think it’s absolutely necessary for stars to stop ‘committing themselves to the climate’. Because even with the best intentions in the world, they do considerable harm to the cause“. Are stars doing more harm than good to the climate cause? In a poll on Instagram with thousands of participants, the result was 70% “YES”. This of course does not have the value of a scientific study but confirms what we can hear on a daily basis.

As long as influencers or other people with a large audience allow themselves to live far above what keeps a planet inhabitable and do anything, like delivering a McDonald’s burger in a private jet, we will have no chance to meet our climate commitments. Again: no one is asked to be perfect. But when you sign an article on the urgency of educating politicians on climate issues on Sunday and fly to promote fast fashion the following weekend for Etam, it is understandable that reaction is part of the response.

Should we wait for a political miracle?

Do we have to wait for politicians to act? Should we wait for Elon Musk, Nabilla or Kilian Mbappé to have a reasonable carbon footprint? The answer is no. This is also one ofthe excuses for climate inactionthat also comes up very often and is just as unbearable.

“100 companies responsible for 71% of emissions, ask them to act first!“. “Individual actions are 25% of emissions, it’s useless“. Everything is an excellent excuse to never act and point the finger at others. The first thing would be to understand that we will need individual AND collective actions. The second is to understand that these actions will not be added together but combined:

Third, it is important to emphasize the importance of co-benefits to change: for our health, our well-being, and if that were not enough, to keep the Earth inhabitable for a majority of our planet’s inhabitants.

The majority of the efforts will also have to fall on the most wealthy households. Not only do theyemit the most CO2 on average, but they also have the most means and therefore the easiest transition.

“The ecology has made only 4.6% in the last elections”

The last point on which it is important to return is the famous score of the French ecological political party in the presidential election. A score of 4.6% would be the proof that the French do not want ecology, or do not want to make efforts. To say this shows a total lack of understanding of French political life and the stakes of the first round.

First, Yannick Jadot was not the only one to claim to be an “ecological candidate”. Jean-Luc Mélenchon also presented himself as an ecological candidate and got 22% of the votes, benefiting from a transfer of votes from people who hoped to see a ‘green/left’ candidate in the second round instead of Marine Le Pen. This would mean more than 26% of the vote.

Secondly, did it occur to those people who think that the French don’t care about ecology that they didn’t vote for Y. Jadot or JL Mélenchon because they think that they are not good candidates, or that their program is not radical enough (or too much)? Why put aside the possibility that the offer is not satisfactory and that people preferred not to vote, or to vote for another candidate they considered as ‘green’? Like F. Roussel or E. Macron for example…

Finally, let’s remember that environmental issues are very poorly covered by the media as a whole, ranging from 1% to 3% of airtime. The possible lack of interest can also be explained by the lack of information on the subject, but also by the poor quality of media treatment. Why should the French change when the government and part of the media tell them that production ecology and green growth will solve all problems?

If the lack of will is sometimes a possible explanation to justify the climate inaction, it is wrong to want to apply it to all the French. This inaction is multifactorial and cannot be justified by a single reason.

Social justice is not sufficiently taken into consideration by policy-makers and as long as this is not the case, we can be sure to fail. In France, but also everywhere in the world. This same justice was completely forgotten during the debate between the two rounds and it is not a coincidence: neither Marine le Pen nor Emmanuel Macron has a program capable of responding to the climate emergency.

Therefore, expecting anything from the Macron 2 government is simply utopian. It will be necessary to act and to put pressure by all means so that it is obliged to take into account social justice inthe ecological planning.