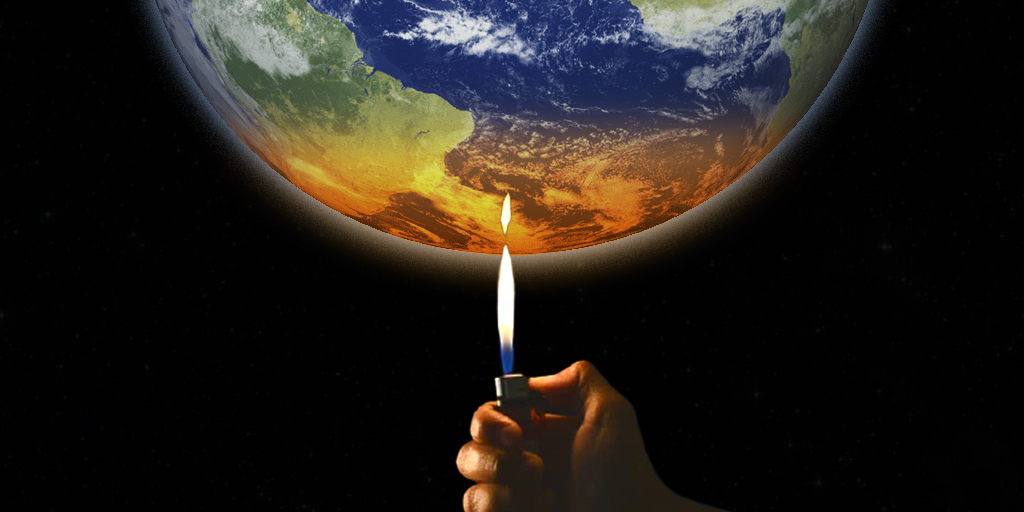 We hear about climate change (almost) every day, but who has ever heard of radiative forcing? It is a notion that is not widely publicized, rarely explained, and this is a pity: it is absolutely central to understanding current climate change.

From the greenhouse effect to radiative forcing

Before getting to the heart of the matter, let me briefly remind you what the greenhouse effect is:

The greenhouse effect plays an absolutely major role in the thermal balance of the Earth. Indeed, if it did not exist, the average temperature would be about -20°C, instead of 15°C currently. The Earth would be a ball of ice, frozen for eternity, on which life as we know it would not exist.

The greenhouse effect is therefore natural: it was not created by man. That of the Earth is well proportioned for the appearance of life (unlike that of Venus or Mars) because it allows liquid water and avoids too great a temperature range. We have all experienced this greenhouse effect: clear nights are cooler than cloudy nights, because the base of the clouds (consisting of liquid and solid particles) acts like the wall of a greenhouse on the infrared radiation rising from the ground, and thus “retains” the earth’s heat.

The scientific term for the greenhouse effect and more generally for all the radiation that leaves and arrives on Earth with its associated energies is the radiation balance. Who says balance, says equilibrium The energy flows compensate each other: the Earth is in a stable state.

This imbalance is made in relation to a stable state: it is thus calculated in relative, compared to the year 1750 which is the dawn of the industrial era.its unit is the Watt per square meter (W/m²) (thus a flow of energy by surface). But we’ll leave the values aside for now, to focus on the explanations and we’ll talk about the numbers at the end.

What is this radiative forcing composed of?

First, an overview with the major categories:

“GHGs” are greenhouse gases (of which the main ones are CO2, CH4, N2O), which create a positive radiative forcing, thus tendency to warming. And for the green bar “Other anthropogenic forcings”, the value is negative which is a tendency to… cooling !

This overview is completed with a natural component, almost without implication in the observed imbalance. The global radiative forcing is thus almost entirely due to the sum of the two anthropogenic (“human”) components:

Now that the framework is established, here is the complete table with the details of the gases, the values, intervals, degrees of confidence etc.. :

Don’t panic! We will detail the 6 blocks one by one, each one being absolutely essential.

Greenhouse gases are said to be “homogeneous” because they are sufficiently mixed and persistent in the atmosphere that their concentration can be measured from a small number of sites and be relevant and usable at the global level, despite the fact that their sources (emissions) and sinks (absorption) are necessarily local.

What do we see?

These short-lived gases are considered pollutants. These are, for example, carbon monoxide (CO), Nitrogen Oxides (NOx) and Volatile Organic Compounds (NMVOCs), which come from the combustion of fossil fuels (car engines, boilers, power plants, …) or from certain industrial processes (fertilizer manufacturing, oil refining, …) They are not themselves greenhouse gases, but they react more or less quickly in the atmosphere to form or destroy other compounds that are.

Example with carbon monoxide (CO) emitted by forest fires and the combustion of fossil fuels:

This double Kiss Cool effect destroys the compounds in question, but the chemical reactions involved produce greenhouse gases, or slow down their purification in the atmosphere, which increases the radiative forcing.

Contrary to what some may have mistakenly thought (e.g. Didier Raoult in his tribunes), aerosols are not gases, but fine particles of all kinds suspended in the atmosphere.

You can see on this beautiful picture 3 types of aerosols: sea spray (typhoons, hurricanes), carbon in the form of soot (mainly from forest fires, here in North America and equatorial Africa), and sand and dust raised by the wind in deserts.

These aerosols have several effects: those on the negative left side of the graph (mineral dust, sulfate, nitrate, organic carbon) will reflect solar radiation and therefore have a tendency to cool (negative radiative forcing). Emitting this kind of particles into the atmosphere is also a way of geo-engineering the climate to reduce the solar radiation reaching the Earth and thus limit global warming.

The right part of the graph, positive, corresponds to soot carbon, resulting from incomplete combustions (unburned), which will absorb solar radiation and thus warm the atmosphere (positive radiative forcing).

There is also an additional warming effect when this soot is deposited on snow or ice and darkens it, thus decreasing the reflection of the surface (change of albedo) which reinforces the solar absorption and thus causes an acceleration of the melting.

All aerosols suspended in the atmosphere have a multitude of chemical and physical interactions with clouds: formation of ice crystals, triggering of precipitation, condensation, change of lifetime, albedo, …

The precise quantification and modeling of these numerous microphysical processes are more complicated than for the other effects, hence the large uncertainty resulting from this part, despite a global radiative forcing that is very likely to be negative (thus a cooling trend).

What about contrails, what about radiative forcing?

While we’re on the subject of clouds: aviation contrails must also be addressed, even if they don’t appear on the graph. Because aviation has multiple impacts on the climate, in addition to CO2 emissions. The most notable effects are the condensation trails resulting from the humidity released by the engines, and also the formation of high altitude clouds called cirrus, resulting from the fine particles emitted during the combustion of kerosene (unburned, NOx, …). Both of these effects increase the greenhouse effect and create a slight positive forcing overall, despite their reflection of sunlight.

This category is mainly deforestation, which has increased the albedo (reflectivity) of surfaces. You can clearly see on this picture the difference in “clarity” between the two sides. Dark forest absorbs much more radiation than grassland or crops.

This change in the reflective surface of the land has therefore induced a slight negative forcing since the pre-industrial era (because brightening of the surface => reflection of part of the solar radiation => cooling). These changes have occurred mainly in populated areas, which is logical (deforestation for the construction of cities, infrastructure, agricultural crops, livestock areas, …).

There are two main natural causes that influence the climate, on century time scales: first, the change in solar irradiance (= energy that reaches us from the sun).

Solar cycles are 11 years long and have been measured by satellite since the late 1980s. In these cycles the irradiance varies very little: about 0.07% between the top and bottom of a cycle.

Reconstructions of solar irradiance since 1750 could be made based on the modeling of magnetic fluxes and relations with sunspots. Depending on the estimates there is either no increase in radiative forcing or very little.

2nd natural cause: volcanoes. Volcanoes emit CO2 during eruptions, and if these emissions are a major issue on geological time scales (of the order of a million years), they have a minor impact on a century scale. At that time, the main contribution of volcanoes to climate is not CO2 or even ash, but sulfur dioxide (SO2). The latter will form droplets of sulfuric acid in the atmosphere, with a lifetime of a few years if the eruption is strong enough to send it into the stratosphere (between ~10 and ~50 km) and if the volcano is located near the equator. These droplets are in fact aerosols that will reflect solar radiation and thus induce a cooling of the lower atmosphere (below ~10 km).

The eruption of Mount Pinatubo in the Philippines in 1991 was one of the largest eruptions of the 20th century, sending nearly 20 million tons of sulfur dioxide up to 35 km in altitude.

These aerosols spread over almost the entire planet in a few months, and caused a drop of about 0.5°C in the average global temperature for 2 years.

Look at these pictures taken from the space shuttle. On the left a photo a few years before the eruption. And on the right another one two months after the eruption: we can clearly see the layers of aerosols released by the volcano (thick black lines above the clouds).

A generalized and lasting cooling caused by aerosols released by considerable volcanic eruptions is moreover one of the probable causes of the extinction of the dinosaurs 65 million years ago.

Let’s recap the different components of radiative forcing, in order:

When you put it all together, here is the evolution of the components of radiative forcing from the pre-industrial era to 2011:

On the negative side of the axis (cooling trend):

On the positive side of the axis (warming trend):

The resultant of all these components (black curve) is largely positive, and the value corresponds to that of the red bar of this diagram that we saw at the beginning: 2.3 Watts per m².

When you put it that way, it doesn’t sound like much and it doesn’t impress anyone. And yet… look at the orders of magnitude that follow. If we apply this radiative forcing on a square of 25m x 25m (i.e. 650 m²), we obtain 1500 W of forcing. 1500 W is the power of this kind of device that is used (absurdly) to heat the terraces in winter.

So this small 2.3 W/m² which does not seem to be much is the equivalent of putting this kind of heating every 25m, on the whole surface of the world, and making it work 7 days a week, 24 hours a day, 365 days a year. 1.2 million billion Watts in all.

If we reason in terms of energy, the figures are even crazier. Over a year, the radiative forcing induced by this additional greenhouse effect sends 37 trillion billion joules back to the surface. It is absolutely colossal, and completely impossible to imagine with our senses.

Watch this video. It is a Soviet nuclear test made in 1955. Well, the energy of the radiative forcing on Earth is this explosion 80 times per second, permanently. That is one in France every 10 seconds: the duration of the video…

To continue on this path, since 1945 there have been about 2500 nuclear tests in the world, for a total energy release of 540 million tons of TNT. Well, all that energy is just 32 minutes of radiative forcing…

Are you concerned about nuclear weapons? This is legitimate. Climate change should be of equal concern to you.