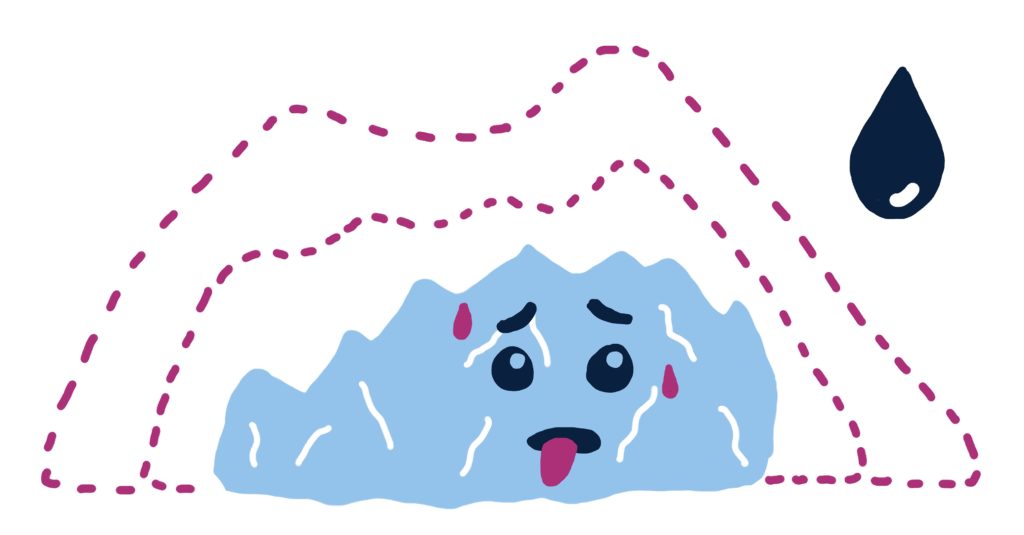 Climate myths still remain and persist in the public sphere. Given the climate emergency, and in partnership with the National Institute of Sciences of the Universe (INSU), we would like to demystify some cliches about climate change and propose instead scientific knowledge to a wider audience.

With misinformation rampant about the impacts of climate change on glaciers, we couldn’t ignore this important subject.

Glaciers are large accumulations of land ice. They form in areas where snow falls year-round and in enough quantity to accumulate and transform to ice. The Earth has more than 200,000 continental glaciers. We aim to answer recurring questions, such as: how do we measure the evolution of glaciers ? How do we know about their past condition ? Have they always been larger than today ? And finally, is it correct to say that humans are causing glacier retreat ?

To answer these questions, we have received the precious help of five scientists, authors of an exclusive review of the most recent research on glaciers:

How do we measure the evolution of glaciers ?

Glaciers are made up of ice that slides from the mountain tops to the valleys. According to their geometry (size, slope, altitude, shape of the basin, etc.), the position of the frontal part moves at an extremely variable pace (from a few to more than 1000 years) compared to the long-term variations of the climate. Therefore, to understand the links between climate and glaciers, it is crucial to measure and analyze not only the visible part, but the surface mass balance of the entire glacier at decadal scales to find an overall trend. The surface mass balance is the gain or loss of snow/ice, expressed in the volume of water that would be obtained from melting said snow or ice.

Retreat and advance of glaciers

Changes in total mass balance stem from surface processes (accumulation and ablation) and the dynamic response of the glacier. Net accumulation (the mass balance is positive) means that the glacier is advancing because the position of the front of the glacier extends towards the valley. However, with net ablation, the glacier retreats because the front of the glacier moves towards higher altitudes. Studies carried out in the Alps show that, although there is a high degree of interannual variability, there is no multi-decadal trend in snowfall accumulation at high altitudes. In contrast, ablation, which is mainly a consequence of snow or ice melt, has been increasing in recent decades.

Longer melting seasons and more intense melting during the middle of summer explain this trend. Furthermore, the rise in temperature increases the fraction of precipitation that falls as rain, which diminishes the ability of the glacier surface to reflect solar radiation (albedo).

How do we know about their past states ?

We can date some fluctuations

Concerning past fluctuations, for periods preceding historical records (such as aerial photography of the middle of the 20th century, miltary maps during the 19th century…), it’s possible to map and date some glacial advancements studying rock deposits from glaciers called moraines.

Furthermore, the magnitude of intermediate fluctuations between two moraine stages is difficult to reconstruct. That’s because the traces are erased by the most recent advances when they exceed the previous ones. The Little Ice Age, that occurred from the early 14th century through the mid-19th century, was, in many parts of the Northern Hemisphere, the most important glacial advance since the second half of the Holocene (the geological epoch starting about 12,000 years ago). This makes it difficult to identify past fluctuations. Although we know a lot about the advancement of glaciers, in most cases, it remains challenging to reconstruct a continuous, reliable and precise chronology of the extent of glacier retreat over the last millennia.

But our knowledge is growing

Yet there are some places (in situ wood fossils, lake sediments…) containing data to document the extent of glacial variations during the last millennia, define the positions reached during past retreats. In addition, in situ cosmogenic isotope* dating methods are beginning to provide interesting information about these glacier fluctuations. They require rock sampling from areas that are now deglaciated. Therefore, when glaciers retreat, we are able to tell if these deglaciated areas have experienced past retreats. While we can measure how long the rock has been exposed to the air, we are not yet able to calculate how many times it was exposed.

Have they always been larger than today ?

Compared to today, the surface covered by glaciers has significantly changed. But this evolution varies a lot on the regional scale: In some regions (mostly in the Southern Hemisphere), there is little evidence that glaciers ever witnessed greater shrinkage than today. However, in other regions (mostly in the Northern Hemisphere), there were glaciers that have witnessed greater shrinkage during the Holocene climatic optimum than today (between 10,000 and 5,000 years ago).

Since the end of the 19th century, the world’s glaciers have been losing mass and shrinking. Thanks to several scientific studies analyzed by the IPCC we can affirm, with a high degree of confidence, that glaciers in almost all regions of the world have continued to shrink.

And finally, is it correct to say that humans are causing glacier retreat ?

Glaciers have experienced natural fluctuations over the past centuries and millennia, and the losses of mass were probably close to those observed today. But the time scales and extent of current variations are far from those observed during the rest of the Holocene.

Although widely publicized, the disappearance of glaciers in the Himalayas is significantly slower than the average in other regions of the world. In situ and satellite observations indicate that some glaciers in the Himalayas (Karakoram, Kunlun) exhibit a stable or even slightly increasing mass balance, due to particular meteorological and geomorphological patterns.

What do future projections tell us about the future of glaciers ?

Regardless of the climate scenario, the future of glaciers is partly locked-in due to the inertia of the climate system and the very slow response time of glaciers to climate change. Their shrinking will therefore continue irreversibly until the middle of the 21st century.

For the second half of this century, the future evolution will depend on future trajectories of greenhouse gas emissions, which depends on actions taken today: