Will the Gulf Stream save Europe from climate change? 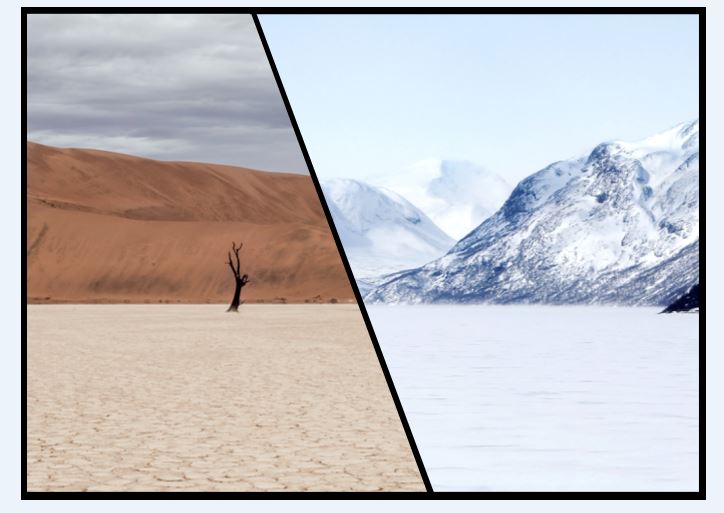 Following the publication of a scientific article at the end of February 2021, the scientific and mainstream press became passionate about the possible collapse of the Gulf Stream, rekindling the collective imagination produced by the Day After Tomorrow.

Gulf Stream? Overturning circulation? What are we talking about?

While the Gulf Stream is a well-known ocean current, the theory associated with the overturning circulation is only about 60 years old. It has been less than 20 years since it was directly measured and thus confirmed to exist. Let’s first define what we are talking about…

The Gulf Stream is an ocean current. It moves north along the coast of Florida and runs along the southeast coast of North America to about 35°N. It then leaves the coast and heads out to the open sea, where it disintegrates into oceanic eddies. The Gulf Stream is the western branch of the North Atlantic anticyclonic gyre, a large horizontal circulation loop that runs from west to east in the Atlantic and rotates in a clockwise direction. This circulation originates mainly from surface winds and the rotation of the Earth.

After leaving the American coast, part of the water transported by the Gulf Stream (about 20%) flows northwards at the surface and continues across the basin from west to east towards 50°N. It then reaches either the Irminger and Labrador Seas around the southern tip of Greenland, or the Norwegian coast further north. Transported heat is transferred to the atmosphere, especially in winter, which makes the surface water heavier. For this reason, it tends to “sink” to the depths where it feeds the deep currents that generally flow southwards.

This circulation covers the entire Atlantic Ocean, moving northward near the surface and southward at depth, describing an overturning loop, hence the name of Atlantic Meridional Overturning Circulation (AMOC).

The most important thing to remember is that this circulation is not a single current, but an average, a mathematical construction that groups and merges several different currents throughout the North Atlantic, including the Gulf Stream. Its definition does not stop at the equator: it is also calculated in the southern hemisphere and in all other basins.

How are these phenomena known, and how are they studied?

How is the Gulf Stream observed?

How is overturning circulation observed?

Since 2004, a set of oceanographic instruments have been placed along an imaginary line from the east coast of the United States to Africa at latitude 26°N, from the surface to the ocean floor. Overturning circulation intensity is measured continuously on this oceanographic section.

Because these direct observations remain scarce, oceanographers rely heavily on numerical models to study the overturning circulation and its impacts. Thanks to these tools – based on fluid dynamics, mathematics and computational science – numerical experiments are carried out to test hypotheses (i.e., what would be the impact on Europe’s climate if the overturning circulation stopped?) and to reproduce current, past and future oceans.

Finally, paleoceanographers try to reconstruct the fluctuations of the overturning circulation by using indirect measures of its intensity, estimated from various land and marine sediment samples.

Historically, the overturning circulation was thought to be driven almost exclusively by contrasts, related to temperature and salinity (hence the name “thermohaline” circulation). Other physical processes are now known to influence it, such as wind and ocean mixing. It is also known, notably through numerical models and recent direct measurements, thatit fluctuates greatly from month to month, year to year, decade to decade, century to century. These fluctuations can be triggered by many different processes (including, but not limited to, the melting of Greenland…).

It is sometimes argued that there is no overturning circulation because the RAPID measurements at 26°N do not match those taken further south or north. These differences, on the contrary, illustrate that the overturning circulation is not a simple conveyor belt connecting the Atlantic Ocean from south to north, as simplified representations of the ocean may have suggested.

How can we hope to better understand these phenomena?

In April 2021, a new satellite will be launched, which will provide precise observations of the ocean surface and therefore of surface currents.

The increase in available observations combined with recent advances in artificial intelligence and computing capabilities should reduce the uncertainty of ocean models, which still have difficulty reproducing the Gulf Stream accurately. These efforts should improve our understanding of overturning circulation. They should improve the prediction of its future evolution, which can have a major influence on the future climate.

What are the effects of the Gulf Stream and the overturning circulation?

Contrary to popular belief, the Gulf Stream is not directly responsible for the warm winters in Brittany! These are mainly due to the global atmospheric circulation, which imposes an average wind coming rather from the north in New York and from the tropical Atlantic in Brittany. Nevertheless, these winds fly over the Gulf Stream, feed on its warmth, and are eventually influenced by modulations of its position. So the Gulf Stream does influence our European climate, but indirectly, and it is not the only one to do it. On the other hand, the Gulf Stream has significant local impacts: on sea level, coastal ecosystems, fishing resources, etc.

One of the fundamental contributions of the ocean to the Earth’s climate is to transfer the surplus of solar heat received at the equator to the poles. The Gulf Stream and the overturning circulation contribute to this by absorbing heat in the water and transporting it from the equator to the high latitudes. This is why fluctuations in the latter impact global climate: a more intense overturning circulation will contribute to a warmer North Atlantic and a colder South Atlantic than average. Such modulations of ocean surface temperature have implications for precipitation in the tropics and in particular for the position of the African monsoon and its associated precipitation, as well as for the development of tropical cyclones.

In the context of the intensification of the greenhouse effect and climate change, the overturning circulation plays another fundamental role: it contributes to storing, in the depths of the ocean, part of carbon dioxide emitted by human activities. Finally, beyond its impacts on climate, the overturning circulation influences marine ecosystems on a large scale through the horizontal transport of nutrients and the vertical mixing of dissolved gases, particularly oxygen.

In summary, changes in ocean circulation will affect temperatures, precipitation, certain extreme weather events, marine and terrestrial ecosystems and thus biodiversity. And all this will, of course, affect human societies. This topic illustrates the complexity of climate change, which is not limited to temperature change.

What is known about the evolution of this circulation?

Reconstruction of past climate evolution, made possible by the use of water isotopes in ice cores from the polar ice caps, suggests that the overturning circulation may have evolved. Greenland ice cores revealed that, during the last ice age, many fast climate change episodes (of the order of a few decades) took place a priori in the region. These variations in climate, with up to 10°C of warming or cooling in Greenland, have been associated with variations in the overturning circulation. Traces of such sudden climatic variations have also been found in monsoon areas, highlighting and confirming the links between the North Atlantic and the rest of the globe.

Given its spatial scale, which covers the entire Atlantic basin, observing the overturning circulation directly is very difficult. Continuous observations are only available since 2004. These show that the circulation varies over a very wide frequency range. Above all, they confirm the complexity of this circulation and underline the current uncertainties about its functioning, evolution and effects on both the climate and living organisms.

Climate projections from numerical models that feed into the IPCC reports predict that the overturning circulation will most likely weaken by the end of this century to 70% of its pre-industrial intensity. The cause is the increase in temperature and precipitation in the North Atlantic and the melting of the ice caps. The range of uncertainties is however very wide! Some models show reductions of only a few percent. These uncertainties are a direct reflection of those of the climate models… and are also linked to those concerning the evolution of greenhouse gas emissions.

Nevertheless, in these climate projections, a complete collapse of the overturning circulation during this century is very unlikely. Beyond this century, however, it is not unthinkable that circulation will collapse completely; it will then be difficult to restore it to pre-industrial values because its evolution is non-linear.

As far as the Gulf Stream is concerned, as long as the wind is blowing and the Earth is rotating, it will not stop, but it could lose up to 20% of its intensity if the overturning circulation collapses.

What would be the effects of a slowing down or even stopping the Gulf Stream?

Obviously, we are talking about the oceanic overturning circulation rather than the Gulf Stream (which we have just said will not stop any time soon)!

A possible collapse of the overturning circulation, which is very unlikely according to climate projections, would not precipitate Western Europe into a new ice age in a matter of days like in the Hollywood film “The Day After Tomorrow”! Indeed, such drastic changes in the climate system, associated for example with the formation of an ice cap over a large part of Europe, require at least a hundred years to develop.

On the other hand, it could lead to a slowing down of global warming in some parts of Europe, or even to regional cooling on the scale of a few decades, before warming takes over again. But on a global scale, there is no doubt that the models are indeed predicting a warming.

Furthermore, it should be noted that the climatic effects of a substantial change in overturning traffic are subtle in their seasonality. Indeed, the effect of ocean heat exchange is stronger in winter than in summer, especially for the north-western regions of Europe which benefit greatly from ocean heat transfer. This means that even if circulation reduces, we would still have extreme heat waves in the summer. For West Africa, it is clear that a significant decrease in overturning circulation could lead to severe droughts, especially in the Sahelian and sub-Sahelian zones. These densely populated areas would potentially be the most vulnerable to changes in ocean overturning circulation.

So, no, the evolution of the overturning circulation will not save Europe from climate change, on the contrary: it risks triggering even more impacts on marine and terrestrial ecosystems, and thus on our societies.

BONUS: find this article in infographic on the CNRS website!