Living at 2 tons CO2e per year is possible! 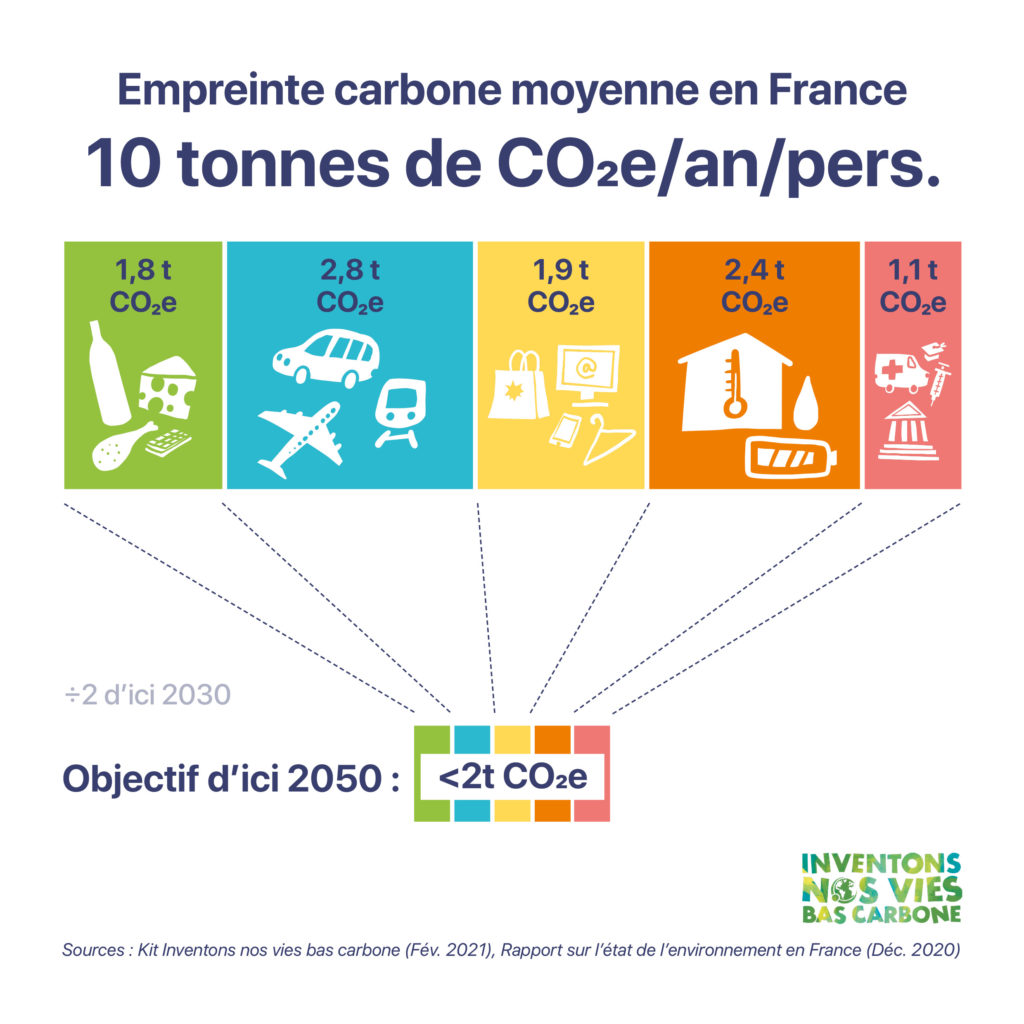 In the 21st century, is it really possible to live in a developed country while emitting less than 2 tons of CO2e per year?

A quick reminder: this step is essential if we are to achieve carbon neutrality, meet our country’s commitments and keep the planet habitable. To be honest: yes and no.

Is it really possible?

YES: we have done it!It means knowing how to cook legumes in many delicious ways, putting your bike on a train to work, installing Linux to make an old computer last, having reusable bags and boxes for shopping and dressing mostly second hand. It takes some effort, but it’s satisfying, and it can be a lot of fun if you’re part of a community where it’s valued (e.g. “Les résistants climatiques” : climate resilient people).

Above all, it is nothing compared to the “efforts” we would have to make to “adapt” to a world with several billion migrants, wars and famines everywhere and a France whose “habitability would be called into question”… At 2tCO2e today, we can work, use the internet, move around France, have a well-heated home, hobbies, friends and respect the Paris agreement.

NO: in fact, the above figure is provided excluding public utilities. Indeed, the current share of emissions from public services is about 1.5 tCO2eq/pers/year (between 1.1t and 1.7t). In short, before my breakfast, most of my carbon budget has already been spent on running schools, hospitals, research, administrations, and the army. And frankly, we don’t know how to do with less than 500 kgCO2e/year in France in an “inserted in society” lifestyle, for the moment.

But that’s not redhibitory given that the law calls for “a 6+ fold” division of our emissions”. Once the decarbonization of the economy and utilities that this implies will be achieved (we’re talking 2040 as the necessary timing, 2050 as the legal timing), my share of utilities will be close to 250kg, leaving me with 1750kg for the rest. Going from 2t to 1.7t will be easy given the overall decarbonization of the economy and the society’s infatuation with low carbon. In any case it will be easier than being at 2t excluding public services in 2020, and that is already possible and desirable today!

At the beginning of 2022, the figures available for estimating the average carbon footprint in France vary from 8 to 12 tons, depending on the source and the year. Moreover, the calculation methodology is currently being modified. In this situation of complexity and uncertainty (analyzed in detail here), it seems reasonable to us to retain the order of magnitude of 10tCO2e/pers/year in France with an uncertainty of 10 to 20%.

Note: these orders of magnitude provide a clear-cut statement. The search for exactitude must be put into perspective by the fact that our targets for 2030 and 2050 are dropping every week, as we are well above trajectories and – by definition – carbon budgets are not expandable.

The “Let’s invent our low-carbon lives” kiton which this infographic is based is available for free download. It provides the figures and sources on which this article is based as well as the elements that will allow you to build your own scenario.

There are a few little things that will have to change

We need to acknowledge that “normality” as it is presented today is not sustainable and we need to build another social norm that is compatible with planetary limits and therefore the continuation of life and peace.

Advanced mathematical calculations have shown that if I adopt a behavior that emits more than 2tCO2e several times a year my chances of respecting this annual budget are close to zero (several teams verified this calculation). Clearly, there are things that don’t pass muster. For example:

It doesn’t work: steak and French fries for lunch! Classic, no doubt, but eating meat every day certainly leads to more than 2 tons. A “predominantly animal” meal (steak, ham and cheese) emits about 7kg of CO2 according to the ADEME. So steak, ham and cheese for lunch and dinner leads to more than 5tCO2e per year (not to mention cardiovascular diseases…and therefore the impact on public services!).

It works: a vegetarian meal can be synonymous with gourmet food. Those who enjoy falafels, mezzes and hummus know this. Today’s vegetarian and vegan cooking is extremely inventive! It is still entirely possible to eat meat on special occasions without putting a strain on our carbon budget, as our ancestors did long ago (and they had much more physical jobs than today).

Let’s keep in mind that the vast majority of farmed animals live in sheds. Learning to eat vegetarian does not mean getting rid of the few cows you see in the landscape, but rather getting out of intensive farming! If we only eat animals raised 100% on grass, we will quickly realize that they are few (because the quantity of grass available is limited) and that the only possible solution is to reduce our meat consumption considerably.

It doesn’t work: buy a nice SUV! (we are talking about the so-called “urban 4WD”). So, yes, it’s true, these big machines consume a lot of petrol, whereas we need to halve our energy consumption (well, that’s the law). But there’s more. Making machines like this emits a lot of CO2: it takes quite a few mines and factories to supply and assemble the few tons of material that we end up calling “a car” (or a tank, it’s just the design that changes).

With mines and factories running on oil, today the manufacture of a large 2.5 tonne SUV (such as a Range Rover or Mercedes) emits about 20tCO2e. So buying an SUV means spending 10 years without eating, heating or driving it (you can certainly admire it in your garage ;-). Or, more realistically, SUVs are not compatible with the Paris Agreement. The question of why anyone who wants to buy a new electric SUV is given €7,000 of public money is, therefore, a good one. The good news is that if you were planning to buy an SUV, this article will save you 30 to 50 000€!

It works : Conversely, fleets of light (300 to 500kg), streamlined, low-speed (max 70km/h) vehicles powered by electricity or synthetic fuels can complement the development of walking, cycling, trains and public transport. It is urgent to direct our effects towards economical vehicles (1 to 2 L per 100km) and to question the speed on the roads (we think for example of the measure proposed by the french Citizens’ Climate Convention to reduce speed from 130km/h to 110km/h on the motorway, which was torpedoed by the presidential veto)!

It doesn’t work: long live 5G ! Streaming is life, or at least that’s how most people who were born after the end of prehistory -around the year 2000 AD- feel. No doubt the servers are well hidden, out of sight, out of mind… but a top secret CIA report seems to indicate that there are many of them and that they consume electricity. A fully public report by the Shift project even claims that digital is already responsible for 4% of global greenhouse gas emissions and that this figure could double by 2025 and continue its trajectory towards the stratosphere. The research firm “BL évolution” indicates that in order to be on a trajectory compatible with the Paris Agreement, the volume of online video consumed should be divided by 3 by 2030. One wonders what purpose 5G will serve if volumes are to be reduced.

It works :good news ! All of Wikipedia’s English texts are about 10 GB in size. Downloading the equivalent of a dozen films would provide enough reading material for several lifetimes and access to a large part of human knowledge. We can certainly continue to circulate information almost instantaneously on a global scale with the Internet: text as much as we want, sound without any problem, a few images, and much less video. Films and series will have to be put back on physical media that circulate. Nothing dramatic, unless you are a Netflix shareholder.

It doesn’t work : new construction in reinforced concrete! The production of concrete and steel is extremely emissive, and new construction artificializes huge areas of land that used to sequester carbon. Meanwhile, most French people continue to live in poorly insulated buildings: they spend a lot on heating for mediocre comfort. The walls of these houses condense and mould, which is not very pleasant to live in. In the meantime, serious renovation of the existing infrastructure has not yet been started.

It works : Let’s shift all construction jobs to thermal renovation of buildings jobs. Everyone keeps their job (many can even be created) and there is work for the whole sector for several decades. Putting a continuous 30cm layer of insulation on the outside of all poorly insulated houses is potentially less difficult, but far more vital than sending a mission to Mars. By reducing heating consumption by a factor of 10, you also reduce your bills and your carbon footprint by a factor of 10: win/win.

It doesn’t work : Tax-free kerosene! The “Gilets jaunes” had asked a clear question: why increase the price of petrol when the richest fly with tax-free kerosene (2% of the population is responsible for half of the flights in France)? To date, we have not really heard a clear answer. The €8 billion annual tax giveaway to the aviation industry is in addition to the billions of stimulus money raining down on the airline and automotive sectors…

Of course, if huge amounts of public money are used to maintain – at a loss – the most polluting and unequal industries, there is no longer any means to invest massively in a decarbonised economy focused on social justice. In other words, if we want to keep a planet and a country habitable, we will have to get involved in politics and change things.

It works : The 149 measures proposed by the Citizens’ Climate Convention are an urgent and necessary minimum (which the current government has decided not to implement). We will have to go further to reach -55% GHG by 2030. For example, we need the law to reduce speed on motorways and limit advertising. We will have to put the money where it does some good, and that means taking it away from where it causes massive GHG emissions.

To do this, we all have a role to play in putting pressure on the State and companies: awareness-raising actions, climate discussions at the coffee machine at work, civil disobedience, bringing the climate emergency to the forefront of political campaigns, going to the polls in the next elections (2022 seems to be the last mandate for the climate if we want to reduce GHG emissions by 55% between now and 2030 – 8 years)… These few examples are illustrations of the 4 actions to which the “Résistant(e)s Climatiques” (Climate Resisters) are publicly committing themselves. They aim to transform the current social norm and are a necessary (but not sufficient) condition for achieving 2tCO2e.

Want to know your carbon footprint in 5 minutes? Click HERE

Want to know more? Here are more details in video!

And other stories of low-carbon lives: https://www.resistanceclimatique.org/temoignagnes_de_resistants

Reminder: 2 tons is a provisional target but it will be necessary to go below that. It is a necessary step, not a finish line. The IEA in Net zero by 2050 published in 2021 estimates that we will only be able to sequester 7 GtCO2 in 2050, which would put us below 1tCO2e / pers… The explanations to follow this year on Bon Pote!