What polar bears can teach us about climate deniers 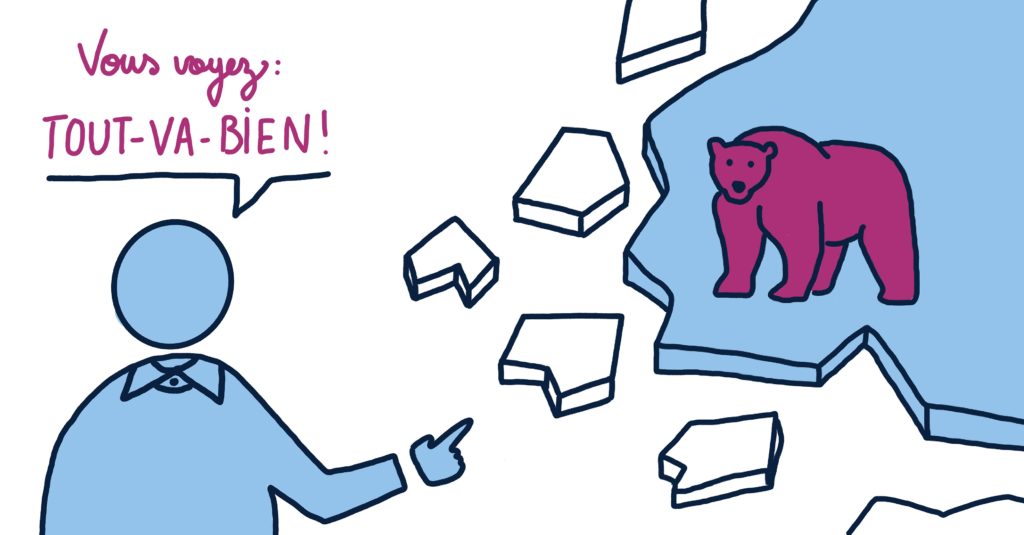 Some common beliefs on climate still remain and persist in the public sphere. Given the climate emergency, and in partnership with the National Institute of Sciences of the Universe (INSU), we would like to demystify some cliches about climate change and propose instead scientific knowledge to a wider audience.

Polar bears have been all over the media for the last fifty years, used as a symbol by scientists and environmentalists as well as deniers. We really wanted to know more about this animal and the ideas it inspires.

Rodolphe Meyer (Le Réveilleur) has made a comprehensive analysis of scientific findings and the communication about polar bears, helped by Aude Lalis from the ISYEB of the National Museum of Natural History.

The polar bear, a marine mammal

The polar bear, super predator of the Arctic’s frozen landscapes, needs no introduction. Its Latin name, Ursus maritimus (“Marine bear”) reveals its particularity: contrary to all other bears, polar bears are indigenous to the Arctic and are an ice-dependent species. They can swim large distances and mainly depend on marine resources to feed themselves. It is therefore considered as a marine mammal !

The Polar bear’s life cycle (and diet) heavily relies on the sea ice. From summer to autumn, there is no sea ice. During these seasons, polar bears are fasting. In summer, the polar bear doesn’t hibernate: it moves around the sea ice, looking for scarce sources of food. During this period, it doesn’t eat much.

In spring, polar bears feed on ringed seals and bearded seals which give birth to their pups and haul out to molt, thus increasing their vulnerability to polar bear predation. This hunting period is essential for polar bears to build up fat reserves for the remainder of the year.

How is the sea ice evolving ?

There are two types of sea ice: The seasonal sea ice (also called annual or winter sea ice), which lasts for less than a year, forms at the end of summer when the polar vortex sets in and lasts all winter. In the middle of winter, the ice can be 1 to 2 meters thick, without counting the snow layers stacking up on top of it. The sea ice is constantly fragmented and reshaped by winds, currents and tides. The other type of sea ice is perennial, or multi-year sea ice, which is 3 to 4 meters thick. It’s several years old, seeing that it normally survives the summer melt season and remains year-round.

The Artic’s total sea ice extent in September has significantly diminshed during the last 40 years, going from 8 million to 4 million km², a decline of about six times the size of France. September is the month where sea ice extent is at its minimum.

This decline will continue as temperatures rise. A study published in 2020 shows, that we could see our first ice-free arctic summer between 2030 and 2040.

This decline in perennial sea ice extent seriously impairs the ability of polar bears to move around and eat come spring season. These sobering results are reported in a 2020 study published in Nature Climate Change. The article shows that Arctic sea ice loss is going to cause important declines in polar bear populations, and endanger the survival of this species before the end of this century.

Polar bears are perfectly adapted to live on the Arctic sea, and would not survive to the disappearance of sea ice. Furthermore, polar bear populations living around the Baltic sea during the last ice age did not adapt to terrestrial life when the climate warmed up. They disappeared from the region along with the sea ice.

Are polar bears a good symbol ?

The article shows that Arctic sea ice loss is going to cause important declines in polar bear populations, and endanger the survival of this species before the end of this century. But; climate change is not only about polar bears.

The progressive decline of sea ice affects the entire Arctic ecosystem and the human communities that live there. The loss of sea ice will affect their way of life, their traditions and their health.

On a global scale, the polar bear is far from being the only species threatened by climate change, and systematically reducing the issue to polar bears is making this species a tree that hides the forest.

Are polar bears the tree that hides the forest ?

We must not forget that climate change is going to have a heavy impact on all human societies in most parts of the world. Replacing headlines of polar bears with headlines showing the deterioration of living conditions as a consequence of climate change may allow for a better understanding of what’s at stake, and make for a better call for action…

But…there are also some good reasons for using this symbol: polar bear populations are directly threatened by climate change, which threatens the only environment to which they are adapted.

And that’s where climate deniers come in. The subject of polar bear makes no exception to the long list of scientific knowledge being systematically contradicted.

The idea that polar bear populations are in a better state today than 50 years ago often comes up. This argument is supposed to be proof that we are overreacting to climate change (or even that climate change isn’t real or isn’t even a problem). The idea is to attack a symbol in order to discredit the problem this symbols represents.

According to a 2017 report published by the International Union for Conservation of Nature (IUCN) current estimates hover around 26,000 bears (22,000 – 31,000). In 2014, the IUCN estimated this number at around 22 000 bears. Therefore, there has been an increase in global populations of polar bears between 2014 and 2017. However, this increase is mostly thanks to research and conservation efforts focused on this species, which, thanks to the reputation of polar bears, have no lack of funding.

Therefore, when we put our efforts into something, we get results. Another article obtained similar estimations when modeling bear populations according to prey diversity.

It’s always a bit more complicated than it seems…

Furthermore, this global number does not mean much in biological terms. Polar bears are divided into several sub-populations. Every sub-population has its own demographic dynamic and the effects of climate change will vary from one sub-population to another. It’s crucial to look into each sub-population individually, because some of them are in good shape, others are in danger, and some have not even been studied yet. The case of the Tchouktches sea sub-population is particularly interesting. We only started studying this sub-population and estimating their numbers in 2018. The results are another 30 000 individuals that we need to add to the 26 000 estimated in 2017 by the IUCN.

If polar bear numbers have been increasing these last few years, it’s difficult to get a long-term trend as ancient estimations are much less precise. Beware of people basing their arguments on population estimates from the 1960s or 1970s…

Another thing to look out for is how trends are going to evolve in the future. Global populations are on the rise, but that doesn’t mean the species isn’t threatened. The loss of sea ice is threatening the survival of polar bears. It is crucial for polar bears to have thick sea ice in the winter to move around, and in the spring to eat. The current state of populations does not change the fact that the survival of this species depends on the existence of the habitat on which it relies.

The subject of polar bears is an excellent case study to understand misinformation, spread by climate deniers, and their false ideologies, which only exist because they refute scientific elements.

Polar bear scientists and specialists have regrouped to propose a common answer to misinformation. It’s a must-read. The fact that this study exists goes a long way to show us the extent of misinformation and how specialists are fed up with it ! It’s pretty rare that scientists from a particular domain choose to study the misinformation they suffer from instead of producing new knowledge on their area of expertise.

Scientists have identified 90 internet websites that addressed the topic of Arctic sea ice and polar bears. Half of these websites reported more or less the same scientific elements than the ones detailed in this article. The other half put forward a completely different version. When looking at the ideas developed on climate-denial websites compared to those based on scientific literature, the difference is obvious.

The authors’ analyses show that there are two parallel worlds: the world of peer-reviewed scientific publications and of websites that relay this knowledge. And another world that produces misinformation completely unrelated to current scientific knowledge. In between, there is a handful of controversial scientific papers.

A small fraction of scientific articles, in red, say that polar bears may be able to adapt. Finally, climate denial websites, in yellow, advocate for different ideas: polar bears are not threatened, the sea ice’s variations are natural and it’s stable in time or only slowly shrinking. Susan Crockford is often cited (we’ll get back to that).

Climate denial websites are not representative of scientific knowledge: they ignore scientific evidence. At least that’s clear ! But scientists didn’t stop there: they tried to understand who produced this misinformation and how.

80% of climate denial websites cited Susan Crockford. According to the 2018 article, Susan Crockford has never conducted any original research, has never published any peer-reviewed scientific article and constantly attacks scientific consensus on the subject. She is in no way an expert. However, she has been proclaimed as an “expert” by the web of climate denial websites because it makes for a great alternative discourse and gives credit to proposals that do not coincide with current scientific evidence. Obviously, this is only made possible by ignoring scientists, the real experts on this question.

It is often difficult to know where the money comes from. But Susan Crockford has directly received money from the Heartland institute, a non lucrative organism which opposes the fight against climate change and also the fight against tobacco, but promotes hydraulic fracturing.

The published scientific evidence points to the following conclusion: polar bears depend on sea ice to survive. The sea ice is retracting more and more every year, and this will affect polar bear populations and potentially (if we continue to emit large quantities of greenhouse gases) lead this species to extinction.

Climate deniers try to discredit these scientific elements without publishing counter-arguments in peer-reviewed journals. At the same time, they do not want this scientific knowledge to reach public opinion. Therefore, they spread misinformation in the form of websites, books and interviews. Their goal isn’t to convince experts on these questions, they do not have the scientific elements to do that ! They only want to deceive the public, either because of their ideology or personal interests. Thanks to the work of researchers, the subject of polar bears allows us to understand how climate change misinformation works !

Consequently, let’s try not to be too harsh with our cranky uncle dismissing climate science during family reunions… he’s a victim of organized misinformation, backed up by large amounts of money and present everywhere on the internet. It’s not always easy to keep a clear head in all of this ! To advance, we have to give the floor to recognized scientists and experts, in order to present the scientific evidence in a clear and understandable way and fight against general misinformation. And that’s what we’ve been trying to do here.

BONUS : the article is available as an infographic on the CNRS website !