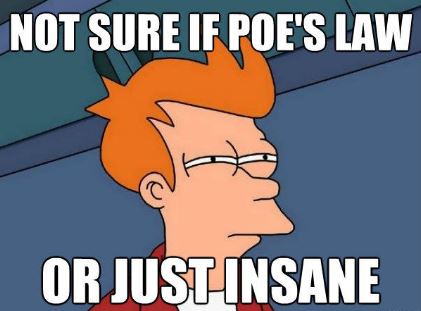 Internet is a jungle. A jungle with its own laws, its own language. On the internet, no need to smile. Throw in an emoticon and the other person will understand how you feel. Did his message make you laugh? Drop a LOL. Explicit, and effective.

As communication is mostly non-verbal, there is little room left on the internet to understand the other’s message… This obviously increases the probability of a misunderstanding. Comment savoir si l’on a affaire à du premier ou du second degré ? This is where Poe’s law comes into play.

What is Poe’s law?

Poe’s law may be less popular, but it can be observed every day on the web. Its definition is very simple: ‘an adage describing the fact that, on the Internet, without a clear indication of the author’s intention, it is difficult or impossible to distinguish between a truly outrageous statement and a deliberate exaggeration for parodic purposes‘.

This law comes from Nathan Poe, an American blogger surfing on forums debating creationism. Poe explains that without a smiley face or clear evidence of humor, it’s impossible to tell if a message is from an extremist or just a prankster.
So we would be unable to distinguish a radical thought or message from a radical message to mock radicalism?

Trolling is throwing a sentence in order to make people react, either by polemic or by laughing. Any geek or gamer knows what the word troll means, it’s in common use and part of the internet vocabulary. For my part, I’ve been seeing such nonsense for 20 years and my brain is used to reading trolls. On the other hand, for people who are not used to it, or those for whom the second degree is only a temperature, the pill is a little less easy to swallow.

It’s obviously a generational phenomenon: people under 30 were born or grew up with the Internet, people over 60 ‘suffer’ it. How many older people have I seen sharing articles from Le Gorafi, not knowing that it was a satirical press? Indeed, the Gorafi never puts smiley faces, so it must be serious…

Should we weigh each of our words?

‘‘I am told that Jews have crept into the room’.‘. This is how Desproges opened a masterful sketch, in which the comedian did not make fun of Jews, but rather of anti-Semites. What a perfect example of the Poe’s law, which did not wait for the internet to come to light! No smiley face, no smile… And no controversy. Desproges died in 1988, and did not have the pleasure of knowing the jungle of social media…

Can you imagine a world in which we should avoid sarcasm, where any word could create a controversy, on which some people would even make a career? Welcome to 2019. Unfortunately, communitarians have taken over the debates where you can’t move a finger without being accused of being a misogynist, a racist or a conspiracy theorist (hopefully all three at the same time).

For whom does the Poe’s law apply?

Given that it is difficult to perceive sarcasm without body language and voice inflections, sarcasm and humor would not always work well together. However, it should not be up to the author to justify each of his sentences, or to punctuate them with a smiley. What a horror! Thank you for sparing us this. The sanitized language, I think everyone is tired of it (a certain Donald understood it very well across the Atlantic).

Anticipating a bit on the conclusion, this Poes’ law should not concern anyone. I don’t want to end up with a novlanguage in a few years, limited to a few words and smileys.

Poe’s Law: should freedom of expression on the Internet be regulated?

I make it a point not to comment on political news, but I will make a small exception with the AVIA law. This law, which aims to control hate speech on the Internet, is very controversial, and rightly so.

Since POE’s law concerns extreme discourse, I’ll take a concrete example that will speak to everyone.
In my opinion, humor is the best weapon to counter extremists.Just after the November 13 attacks, I watched dozens of politicians explain how to counter the Islamic State. We have to put them all on the “S” file, put them all in prison or send them back to their country of origin. Thank you Jean-Marie, but they are French, and you have already registered 11000 people, it was useless.

One solution came from a young cybersecurity expert and former hacker debating a politician on a TV set. ‘ISIS has put the means in their recruitment videos, let’s put the means to parody their video, to ridicule them’. It is by reusing their own language that we would best succeed in making fun of them. Dealing with the problem at the source, rather than bombing another country and killing innocent people in the process? YELLOW VEST ! CONSPIRACIST !

The subject of Poe’s law is really twofold. Firstly, freedom of expression on so-called extreme subjects must in my opinion be total. If the vocabulary is controlled and limited, you will never get to the bottom of what these people are thinking, and it would also become impossible to refute them with humor.

Secondly, it is about the responsibility of what we write on the internet. Do we have to rephrase all our sentences or think ten times before writing, just because some idiot might misinterpret our sentence? Or simply take it out of context, to create a controversy? Certainly, the words fly away, the writings remain. You are responsible for what you write on the internet, and indeed, perhaps some should sometimes refrain from commenting. On the other hand, and under no circumstances, should freedom of expression be limited. Seeing 1984 become more and more reality is really starting to make me tired.

Finally, take a dose of second degree before you go on the internet, it will certainly make your time more enjoyable. I hope that no one, wanting to make fun of an extremist, will ever have to justify their sarcasm. What’s worse than having to explain a joke?

Have a great Sunday everyone, and never forget that everything that is excessive is insignificant.